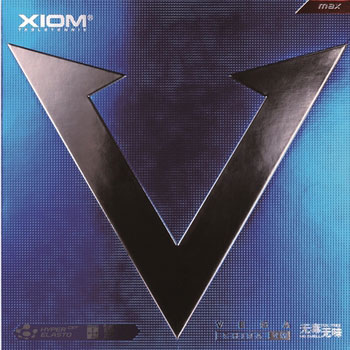 Vega Asia has the low ball-trajectory to create forceful drive shots. As with all Vega Rubbers, Vega Asia is easy to make spins along with deep ball catching feel at impact for control. New black Carbo Sponge maximized the internal efficiency to generate additional energy onto the ball. Ball flies with more power as a result. Resilient tensile structure improves the lifetime of rubber by 30-50%.

Add a Review
View all 8 reviews
External Review for XIOM Vega China VM on March 30, 2014
just like what amigo said above, this is for all out attackers. not for passive playing as well, you have to apply a stroke or the ball will just drop dead. you have to apply heavy stroke in order to utilize the rubbers abilities. but there are a lot other better rubbers for half the price of this one.
Review helpful?    Yes | No
External Review for XIOM Vega China VM on January 2, 2014
Impressions:

The Vega China came in a very sleek, and professional looking packaging, even the plastic used to cover the rubber was of very high quality. Didn't find the topsheet to be too tacky though, it was tacky, but just tacky enough to have any real tack. Bouncing a ball on the rubber shows how much of a chinese rubber it is: it has a very low and dead bounce.

First thing I noticed when I landed my first forehand topspin was how the ball dived towards the floor after kicking off the table, the spin on this thing is just insane! Very easy to impart spin on it, I don't know if it's the slight tack combined with the tensor tech that afford this level of spin but hey, lots of spin is always welcome.

Despite being a tensor rubber with Xiom's Carbo Sponge + Hyper Elasto thing, the Vega China is definitely no speed demon. It's a tad bit quicker than my Mark V and a tad bit faster, but that's just it. The spin gives it an illusion of being tons faster than other rubbers.

Short game was awesome! I could put a friend of mine who I could not win against on the verge of losing because of my tight service returns. The dead-ness of the Vega China in the short game really helps with keeping receives short and low while the tack gives the return a fair amount of spin.

Power Looping is what this baby is made for. Most of the guys I had a hit with found it difficult to return my power loops with the Vega China, they are just so much quicker and are tons spinnier that it just becomes too difficult to block effectively.

Control wise, I can't comment. I came from a pure Euro rubber to a Chinese Tensor and only had a day to hit with it. At first it felt like it had little control because I kept over-hitting but after a few hours of playing, I got the hang of it and it wasn't so uncontrollable anymore. So control would largely be dependent on technique. Poor technique = low control rating.
Review helpful?    Yes | No
Review by bildo26 (Verified Customer) for XIOM Vega China VM on December 6, 2013
I bought this product to replace my Donic F3 and I LOVE IT! I used to have trouble with the crazy spin serves from my friend but now I can attack his spin serve and control it perfectly. The control this rubber provides to my game has given me the confidence and tools to attack 90% of the time and land the shots successfully. I just played one of the best nights of my life using this rubber. It felt as if I couldn't miss. I love the combination of the tacky topsheet and the medium sponge underneath. The sponge in not as springy as the Donic rubbers tend to be. I have used Donic F3, Bigslam, Baracuda (and many more) and I have always been a big Donic fan, but the springiness has been hard to control. Only now can I see the problem I was having with the huge kick from my Donic rubber. Those problems are gone now that I switched to the Xiom Vega China.
Review helpful?    Yes | No
External Review for XIOM Vega China VM on October 2, 2013
Rating for Xiom China VM @ Max.

Professionally packed in typical Xiom Vega style (not a vacuum pack) with plastic cover over the rubber surface. Sponge is black but does not look much like rest of the Vega series. Not very porous at all, as a matter of fact it looks a little bit like a rubber material. Pips are medium height, or maybe on a shorter side. Very much like Vega pro or TG3 height (measured with the naked eye :) only). Tacky top sheet as all the rest tacky sheets will stain a bit over time coz of cleaning.

Insane!!!! Short top spin (opening loops) are just as good if not even better then H3 or TG3 tuned. Rubber can open up game with no effort what so ever. It lifts under spin with such ease it is hard to believe. You get that relatively dead feeling which is perfect for those shots. Hard to tell in a short game that you are playing with tensor, very much Chinese pro style feel to it. All that up to incredible openings.
Medium distance is where the things get little bit confusing. I cant actually classify this rubber as china or tensor at medium distance. It will provide you with forgiveness of a tensor and better bounce then china rubbers. So it can save you easily when out of position or when you are in any kind of trouble (talking about those blocks that sort of look like drives or any other "in trouble" move you may make). Catapult effect will also be noticeable at this distance but nothing like typical tensor.
When you play away from the table spin is probably the best. Equals H3 or other pro rubbers. Feel is sort of the same to TG or H with additional help from tensor technology (again some forgiveness added). At this distance you will feel a lot of catapult and rubber will click continuously. If you hit with elbow bent then your spin will be less at this distance, otherwise you have a demon in your hands.

In short game rubber is as dead as it can be. Deffo by far least bouncy tensor i have ever played with. Super good control in a short game.
Medium distance game just effortless i wont even bother elaborating on this.
When you go back 3m+ and start going hard this is where this rubber shines. Due to the hard sponge and springiness of a tensor technology you can go as fast as you like. Simply there is no way to bottom out that sponge. Compared to Vega Pro which i probably bottom out at about 80% of my strength this thing i can put in, imo 110% and it will still go strong. Sort of like DHS monsters.

Higher throw rubber great for bombing away from the table. Semi tacky with a huge bite on the ball. Rubber feels bit heavier then Vega Pro (i dont have a scale to measure exact weight), but it is not the heaviest there is.

Would highly recommend this to a physical players and all out attackers with well developed skills. People who swing like mad and dont mind getting tired while during practice.

Since this rubber has been rated only 3 times before this review i hope this will help a bit. Dont be afraid to buy it if you like to smack the ball from time to time. Keep in mind that on most forums people rate H3 as slower rubber (version does not matter) but somehow H3 is fast enough for Ma Long so i bet most of us hit stronger then he does :).