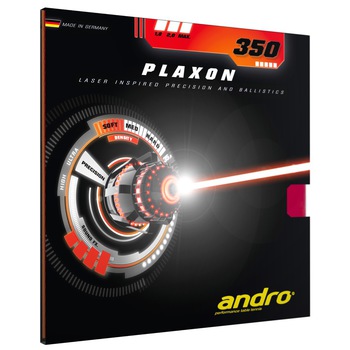 Extreme soft sponge for maximum playing spirit combined with highest control and failure tolerance. Newly developed surface and sponge components harmonize perfectly and directly forward the impulse over the racket into the players hand. Experience best feeling and control. The failure tolerance sets new limits within the realms of possibility. The perfect rubber for players who prefer softer rubbers seeking to adjust their game to the new plastic ball.

PLAXON  an absolute new rubber generation: a compact, energized sponge combined with a topsheet that optimally reacts especially with the new plastic ball.
PLAXON  the right rubber for each player type thanks to four versions in varying sponge hardness grades. Adjust your material to the new requirements, select your update for the new ball!
PLAXON  makes you a better player! 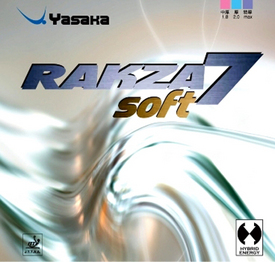 Andro has dedicated over three decades to the development of high-performance table tennis equipment. Exemplifying German engineering prowess, Andro rubbers are built for speed, spin and versatility. Through rigorous research and development, Andro consistently delivers products for those individuals who demand the most from their table tennis equipment. No one demonstrates this better than Simon Gauzy from the Andro pro team. His unrelenting style of play lets him push the boundaries of what's physically possible.

Andro has a long list of professional quality rubbers. The Andro Rasanter series is a mainstay in the table tennis world and the Hexer series is on the cutting-edge of offensive rubbers. For pips-out players, check out the Andro Blowfish and Chaos rubbers. Andro rubbers will keep you going strong in your next match!

Add a Review
Review by bskore (Verified Customer) for Andro Plaxon 350 on October 3, 2018
Don't like it. I am a chopper, pusher and occasionally looper. Used this on my backhand. The bounce was erratic on my pushes and chops. The ball was either falling short of the net, or bouncing high giving the perfect opportunity for the opponent to smash. Blocking did not work at all, with the ball falling short of the net every time.
Review helpful?    Yes | No
External Review for Andro Plaxon 350 on September 24, 2018
very easy to control. Excellent spin for bH.
Review helpful?    Yes | No
Review by yogi_bear for Andro Plaxon 350 on September 23, 2015
I am a fan of the Impulse Speed because it was the first Andro Rubber I have owned and it is an amazing backhand rubber. I am not an avid user of soft rubbers for the backhand and I prefer medium to medium hard rubbers but few exceptions like the Impulse Speed, Rasant Beat and then this one. Both the Rasant Beat and Plaxon 350 seem to be rivals in performance with the Beat being spinnier. The 350 is soft but not too soft like a Xiom Vega Elite. The Plasma 350 is very spinny and at the same time has enough speed. The rubber, like the Beat, is bouncy and lively. Speedwise, it is slightly faster than a Vega Europe and almost equal speed with Beat. The Plasma 350 excels in smashing and driving. I find the 350 as a better controlled smashing rubber than the Beat. Even with the Sardius that is considered as a very stiff blade, I didn’t expect any bottoming out. Unlike other soft rubbers, the softness of the sponge gives way to bottoming out and you hit the ball with the feeling of wood hitting the ball. The 350 somehow has a good sponge that lessens the compression of the ball against the sponge. Spinwise, kit is not as spinny as the latest tensors but nevertheless rated as very high amount of potential spin generation. In my opinion, there are rubbers that have huge spin potentials like tenergy but not everybody can fully utilize the rubber because it takes skills and then there are rubbers that are less spinny but due to being easier to handle, you can produce huge amount of spin. My only letdown on the 350 and 450 is that both seem to have lesser spin when using the polyball. This is a good all around attacking rubber. From blocking to placement shots and attacking using smash or drives, the 350 is very good. Developing players would appreciate this rubber and learning basic strokes is easier and enjoyable.