How to Play with Antispin 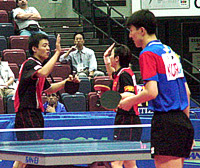 Deceiving your opponent with Antispin rubber

In today's article I'd like to discuss the subject of how to play table tennis with antispin rubber. I have used antispin previously, but it was quite a while ago now (over 10 years) so I'd be happy to hear from anyone with more recent experience who has something to add.

That said, let's get down to it.

How does antispin work?

Suffice to say that antispin rubber is not the solution to all your table tennis problems. It is a rubber that has been created to fill very specific requirements. When used for those purposes, it does an excellent job. The problems start when people start trying to use it for what it is not designed for, or equipped to do.

What are the advantages of antispin?

Antispin rubber has several good points, including the following:

What are the limitations of antispin?

Despite all these pluses, you don't see every person out there playing with antispin. Here are some reasons why:

Tactics and Techniques when using antispin - What to do

Check out your opponent

Study your future opponent carefully if you get the chance before the match, or even during your match if you have to, looking for such points as:

Many opponents try to nullify the antispin by hitting no-spin balls to it, so that there is no spin to reverse, thus helping them have less problem in reading the spin. Others use a no-spin return in the hopes that the antispin user will pop the ball up high when attempting a normal chop with the antispin side (sound familiar?).

Here are some tips for dealing with floated balls to your antispin.

Quite often, your opponent will start with float balls to your antispin, and see how you handle them. This is because the float return is the easiest and safest for him to use. Once you have shown him that you can deal with the float ball without any problems (by using the techniques mentioned above), the more advanced opponent will often then try using heavily spun pushes to the antispin in the hopes that he can make you put the ball in the net.

The techniques mentioned above for the float ball will still work with the backspin ball, with some minor changes.

I'm assuming here that you are playing fairly close to the table - simply because it's difficult to use antispin to counterhit or topspin balls back from 2-3 metres away from the end line - and so the standard chop is used more often from a distance.

Here are your basic options when returning a topspin ball from close to the table: