The Guide to Serving in Table Tennis 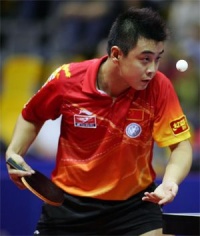 Using your service to win games

Ask just about any high level player what the most important shot in table tennis is, and the chances are pretty good that he'll reply - the serve.

But on the whole, the serve is a much neglected part of lower level players, who prefer to practice their rallying skills when training, and like to talk about the best technique for a forehand loop. In this series of articles I'm going to redress that balance a little, as I concentrate on that oft-underrated stroke - the serve. After all - every point has one!

I'm going to start in this article by discussing some general aspects that apply to all types of serves. In later articles in the series we will examine particular serves in more detail, such as the Forehand Pendulum serve, the Backhand backspin/sidespin serve, etc.

Now, for those of you who like to know why, away we go...

Why is the Serve important?

What is it about the serve that makes it such an important stroke? Reasons include:

What makes a good serve?

This is a trickier question to answer, because what could be a good serve under one set of circumstances could be a bad serve under another. So instead of giving a hard and fast definition of a good serve, I'll discuss several of the factors involved in serving, which work together in different amounts to make a serve good or bad depending on the situation.

These are serves that bounce once on the opponent's side of the table, typically within six inches or so of his endline. The emphasis is on surprise and speed to force weaker returns from opponents, which can then be counterattacked. If your opponent is not caught off-guard, you may be getting a very strong attack coming back at you, so use with care!

The placement of the ball when served to the opponent will have an effect on whether the serve is a good or bad one. What makes for good or bad placement will depend largely on your opponent - different players stand in different positions when receiving serves, and also hold their bats differently in preparation for their receive. They will also have different strengths and weaknesses in returning serve (ie some will be better at flicking than pushing, some might be great at looping long balls on the forehand but weaker at long balls on the backhand).

Some things to be aware of in terms of placement are:

A good option is to cross over or go into the opponent's playing elbow (also called the point of indecision). For shakehanders and reverse penhold backhand (RPB) penholders, this area is where the opponent must make a decision between returning with a forehand or backhand. For standard penholders, the point of indecision is the area where they must decide between a forehand side hit and a backhand side push/block or hit. Crossing over or entering this zone forces the opponent to decide quickly which stroke to use, and then he must also use footwork to allow him to hit the stroke correctly. By forcing him to make more decisions and use footwork too you increase the chances of him making the wrong decision, or making a mistake whilst trying to move and then hit the ball.

Deception has always been an important part of serving. With the recent rule changes designed to end the practice of hiding the ball during the service, deception in serving has changed as well. Nowadays, players focus on deceiving their opponent by:

Use serves that tend to complement your best third-ball and fifth-ball attacks. If you are better at opening your attack from a backspin ball, use double-bounce serves with heavy backspin and sidespin, that are difficult to flick, in order to encourage a push return. If you are better at counterattacking, you would be justified in using more long serves with varied spin and placement, to allow your opponent to attack, but to make it hard for him to attack well, so you can make a strong counterattack on your third ball.

Considering how important the serve is, how often and for how long you should practice it? I would recommend at least 10 minutes of serve practice for every hour spent training. You have to do enough to keep your serves sharp - there is not a lot of room for error when double-bounce serving or serving long and deep. Also, try to find some time where you can just serve with a bucket of balls and no opponent - when you play against someone else it can often be hard to know whether you really are double-bouncing the serve, or is your opponent pushing or flicking balls that he really should be looping back?

Make a point of having a working knowledge of all the serves - you don't have to master each one straight away but you should know the theory of how to execute them. This will also help you when it comes time for you to return someone elses serves! You will need to master at a minimum the forehand pendulum serve (with backspin/sidespin, sidespin only, and topspin/sidespin) and the standard backhand serve (again with backspin/sidespin, sidespin only, and topspin/sidespin). More exotic serves such as the forehand tomahawk, reverse pendulum and others can be mastered later.

Serving - other factors to consider

Some other aspects of serving to keep in mind include:

The points mentioned above should be enough to get you started when you are ready to look at improving your service execution and tactics. In future articles we'll look at the different individual serves one at a time.

Read what others have to say:

Thanks a lot Greg for taking the time to write the article. I find it very useful and will try to stick by the notions you touched on.
Very well done indeed!