Table Tennis: Getting a Grip 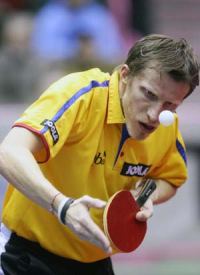 Getting a handle on your grip

I'm not going to get into the different style of grips that are around and their relative merits, I think that's really a topic for another time. Today I'm going to discuss grip tightness and grip changes.

In general, a loose grip is used when you are trying to help reduce the effect of the power or spin of an opponent's shot. Holding your racket slightly looser allows the racket to move a little more backwards when contact is made, thus causing more of the pace or spin to be absorbed by the racket itself. I think this is what the coach meant when he mentioned borrowing the spin of the opponent, you are controlling their spin without imparting much yourself.

A loose grip is also useful when you are attempting to play a touch shot, such as a gentle drop shot over the net from the return of serve. Loosening the grip allows you to hit softer than a firm grip, which can help when you are trying to hit a double-bounce return. Defenders sometimes use a loose grip to help absorb the pace and spin of the ball when chopping as well.

Using a firm grip when you want to impart your own spin on the ball also makes sense. In these situations you usually want to get as much spin or speed out of your stroke as you can, so a firmer grip will allow a better rebound from the racket, increasing the spin and speed.

Having a firm grip will be helpful when you are trying to loop, reloop, or block the ball with pace. A heavy push would also be easier with a firm grip.

There are two main times you may want to change your grip, these being when you are serving, and during a rally.

Changing your Grip during Service

This technique is quite common today, and seemed to first become common during the mid-1980's, when several top European players began to hold the bat between the thumb and index finger only when serving. This appeared to be an attempt to allow shakehanders to achieve a freedom of motion when serving that came close to the penholder grip.

There now appears to be three main approaches when serving shakehand:

Changing your Grip during a Rally

The idea of changing your grip during a rally is a big no-no according to some players and coaches, and perfectly acceptable to others (probably depending on whether they change their own grip or not!).

On the world stage, Timo Boll appears to be one of the biggest grip changers, with notably different grips between his forehand and backhand. The debate still rages on various Internet forums about whether this is an advantage or disadvantage... Previous to Boll, Jan-Ove Waldner was noted for his grip changes to achieve certain shots, but it was fairly common to admit that he was a table tennis genius, and that changing the grip was perhaps not a great idea for the rest of us!

The main pluses of changing your grip during a rally is that it can allow you to better hit specific shots, such as Waldner's sidespin blocks, or Boll's heavy topspin loops. The main argument against is that you can get caught with the bat in the wrong position, making your stroke awkward at times. Both points of view are valid, but the importance of each will vary from player to player. Creative players who can think fast will often benefit from using grip changes to enhance their strokes, while those of us who don't have the same speed of though might want to limit the amount of grip changing we do.

Changing your Grip during a Rally - my own experience

As an example, I have been a combination bat defender and twiddler for many years. I used to use very different grips for the forehand (heavy forehand grip) and backhand (extreme backhand grip), believing that as a defender I had plenty of time to change between the two. Besides, I was turning the bat to twiddle quite often anyway, wasn't I?

Then, for a while, I changed to attacking from both wings with speed glue. It soon became clear that I couldn't afford to be making such big grip changes from forehand to backhand. I had to spend a good 3 months or so changing to a neutral grip that allowed me to hit both forehand and backhand without getting caught changing grips so often. It was a painful process but worked much better for me.

My overall rule of thumb(!) is this - if you routinely find yourself getting caught changing grips more than once or twice in a match, think seriously about trying to convert to a neutral grip. Those freebie points you are giving your opponent may just make the difference between defeat and victory. It will take you about 3 months and a lot of frustration, but it can be done - if I can do it with my own extreme grips, just about anybody can!

Image: Jörg Rosskopf of Germany - a good example of dropping the fingers from the bat when serving. Balancing the ball on your nose is optional!
Photo by: Zeljko Lukunic, courtesy ITTF