Wobbling the ball with Long Pimples 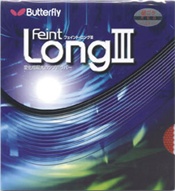 What is the 'Wobble'?

When we talk about the long pimples wobbling, what exactly do we mean? In most cases, players are referring to the ability of the long pimpled rubber to make the ball seem to dip, rise, and suddenly go to the side while in flight. When you are playing against a person using long pimples, and the ball coming towards you suddenly seems to drop six inches then go sideways for no apparent reason, that is the sort of behaviour we mean. The best definition of 'wobble' I can come up with is this:

Wobbling occurs when the table tennis ball suddenly moves from its natural flight path without any obvious reason.

What causes the wobble?

It's actually easier to explain this in terms of why a table tennis ball doesn't wobble all the time. A table tennis ball is very light - the current 40mm ball must weigh only 2.7g! That means that any motion of the air around it will tend to affect the flight of the ball.

So why doesn't the ball wobble on every stroke?

Without trying to get too technical, it's the spin on the ball that keeps it on a true flight path. A topspin ball will tend to drop towards the table, while a backspin ball tends to rise. A sidespin ball curls in the direction of the spin. Combinations of topspin and sidespin will make the ball go down and to the side, and backspin and sidespin will cause the ball to want to go up and to the side before gravity takes over. (If you can work out how to put topspin and backspin on the ball in a significant way, please let me know!) The spin makes the ball curve in a predictable manner, and also helps to prevent the ball being affected by the air currents that are moving around the playing area.

But what if there is very little spin on the ball?

How can I make the ball wobble?

Well, technically you can't make the ball wobble at all - in order for you to able to make it wobble you would have to be able to change the spin on the ball after you hit it, which is impossible, or you would have to have control of the weather and the air in the playing area.

Naturally enough, some rubbers will be better at killing the spin than others - this is why you very rarely see a normal rubber player wobbling the ball - in order to completely kill the spin he would have to exactly match the spin on the ball from his opponent - too little and the ball will still have some of his opponent's spin, too much and he will put his own spin on the ball. Only if he gets it exactly right will the ball have the chance to wobble.

Long pimples are naturally better at killing the spin than normal rubber or antispin - this is because when used correctly, the long pimples will bend around the ball and tend to grip it from all directions, so when the ball comes off the pimples they will all be trying to spin the ball, and thus the overall effect will be a float ball.

Maximising your chances of wobbling the ball

In a nutshell, your best method of creating a wobbling ball will be to use a long pimples with pimples that can bend enough to grip all sides of the ball, and then attempt to hit the ball in a relatively flat stroke, or with a stroke going against the spin of the ball a little. This also explains why the stiff pimples with glassy, frictionless tops but grippy sides are better at creating wobbling balls from hard loops then from softer shots - they need a certain amount of force to be able to bend the pimples around all sides of the ball - without enough force the pimples won't bend and the ball will tend to keep spinning. So a softer, more flexible long pimples will tend to better at creating wobbling balls from all situations, while the stiffer pimples will tend to only work against shots with a certain amount of force. You could probably try to hit the ball harder yourself to cause the stiff pimples to bend against a soft shot.