On this occasion, I was given the opportunity to evaluate the Butterfly Harimoto Tomokazu Innerforce ALC (HALC) blade, which was developed in cooperation with, named after, and used by, the young Japanese superstar with the aggressive close-to-the-table playing style. The Harimoto ALC is a 5+2 ply composite blade in which ALC fibers are surrounding an ayous core, while the penultimate and outer plies are made of limba. The ALC fiber combines the properties of Arylate (i.e., lightness, flexibility, and shock absorption) and carbon fiber (i.e., high elasticity and minimal dissipation of energy). According to Butterfly, the slightly larger head of the HALC, allows for a softer touch and increased ball dwell time during topspin play, which supports aggressive forehand and backhand play. The HALC is described as an attacking blade with reaction and vibration ratings of 10.7 and 9.2, respectively. By comparison, the classic Viscaria blade has corresponding ratings of 11.8 and 10.3, respectively. Hence, the HALC is expected to be a little slower and softer than the Viscaria. 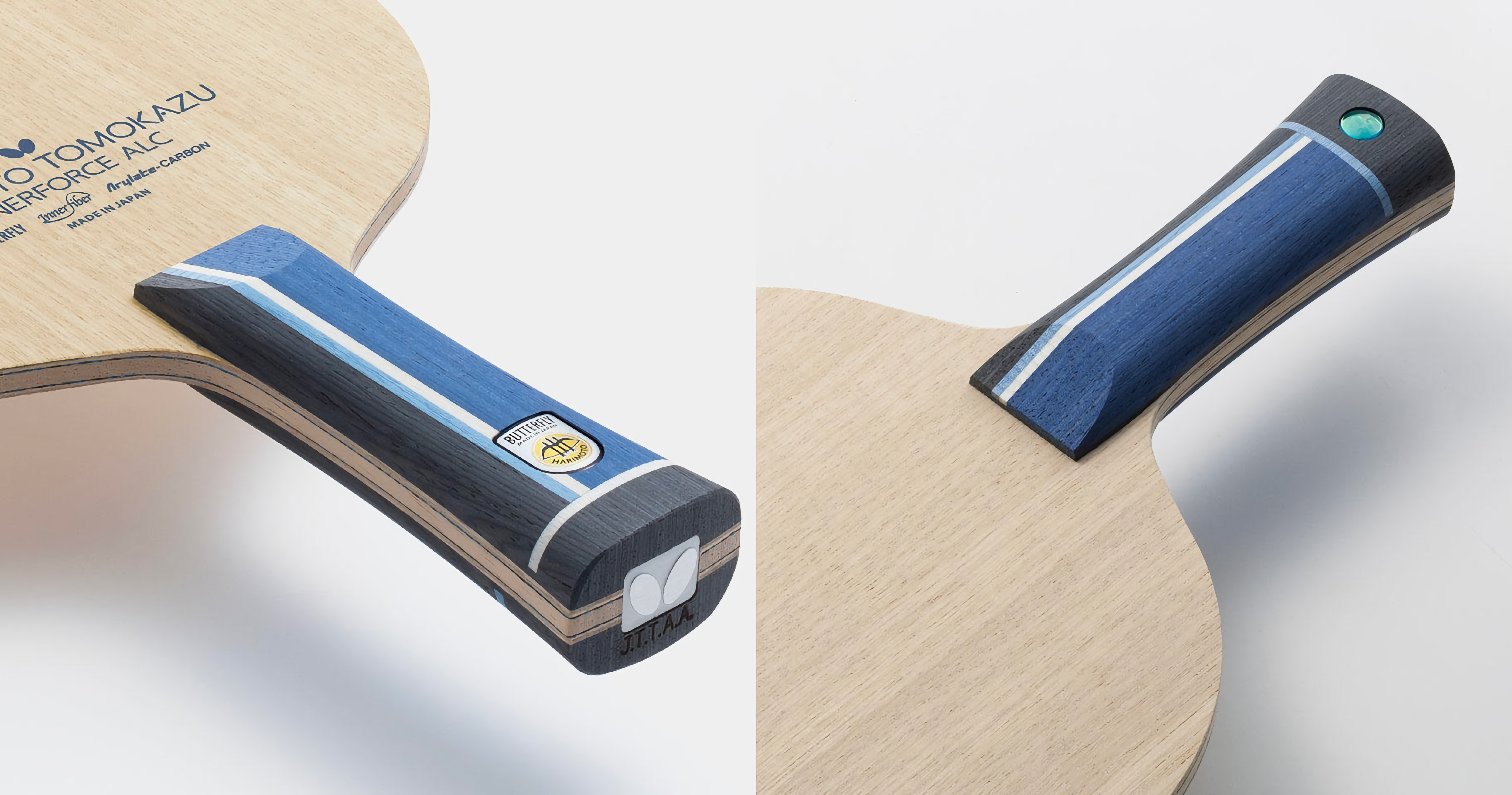 The HALC is delivered in a sturdy, modern-looking box that has a color scheme that matches its handle, i.e., predominantly dark blue and black with white and light blue vertical stripes. The box provides excellent protection during shipping and transport. The blade name, along with key technical information, is listed on a sticker placed on the front lip of the box. Recommendations on how to care for the blade are provided on the back.

The HALC looks sharp and modern. The blade name is listed on the FH-side of the straw-colored playing surface, whereas there is no text on the BH side. As indicated above, the handle is predominantly dark blue with black, white, and light blue vertical stripes, against a black handle base. The FH side of the handle features a small, beautiful gold-on-silver metallic lens, while the BH side features a small, circular holographic lens. A silver Butterfly tag adorns the handle butt. The blade appears to be well-made with smooth playing surfaces and very lightly sanded wings. However, the edges do not appear to have been sanded.

I tested the Harimoto ALC using Butterfly Dignics 09C in my FH (black, 2.1 mm) and a short pimpled driving-type rubber in my BH. I attached the rubbers using two layers of Butterfly Free Check Pro glue. I tested the set-up over 4-5 sessions playing a mix of regular and match-like drills against my regular high-level practice partner (two-winged looper) using 40+ ABS training balls throughout this test. I was also able to evaluate the HALC alongside a Butterfly Viscaria blade with identical rubbers.

Compared to the Viscaria, the HALCs center of gravity is tilted closer towards the handle, which is a little surprising given its larger head size. This gives it a lighter feel, even though the HALC actually is ~6 grams heavier than the Viscaria. The HALCs grip is as comfortable as that of the Viscaria but the different balance encourages a deeper grip.

The D09C/HALC combination produces a crisp feeling on FH and BH drives, though the sensation is softer than with the corresponding Viscaria-based set-up. In other words, the HALC feels woodier though one is never in doubt that this is a composite blade, which I attribute to the Innerforce construction, i.e., the ALC layers being located next to the core rather than below the surface ply. The HALC also absorbs less energy and is slightly bouncier than the Viscaria, which gave me the initial impression that the HALC is slightly faster. If anything, however, the HALC is slightly slower than the Viscaria on higher impact shots as there is a more direct power coupling in the latter (i.e., it is more linear). Be it as it may, the speed differences are relatively minor, and I would categorize both blades as low OFF. The consistency on my FH and BH drives was very good, though slightly lower than with the corresponding Viscaria-based set-up, as the feeling upon striking the ball is a little more muddled with the HALC.

FH looping with the D09C/HALC combination is very robust but doesnt feel as exciting as with the corresponding Viscaria set-up due to the softer contact point. Nonetheless, my FH warm-up loops were consistent and comfortably cleared the net with a medium-high arc, while still dipping down before the endline. Akin to my observations with the corresponding Viscaria set-up, FH 3rd ball attacks against pushes were easy to execute but lacked spin power, thus reducing the percentage of outright winners. I attribute these characteristics to the rubber rather than the blade as it is challenging to generate very high spin levels with the hard and marginally tacky D09C. The HALC/D09C combo excels at follow-up offensive shots (5th, 7thball) that are executed relatively close to the table and enables victory through aggressive consistency. Thus, the looping characteristics of the HALC closely resemble those of the Viscaria, except for feeling less crisp and being minimally slower. I cant help but wonder if the HALC would benefit from being paired with more elastic rubbers like Dignics 05 or Tenergy 05.

The slightly bouncier nature of, and more pronounced arc produced by, the HALC vis-à-vis the Viscaria provides more safety over the net in FH topspin-to-topspin rallies far from the table. At the same time, however, HALC is a less stable platform as it absorbs less incoming energy, meaning I couldnt hit through the ball with brute force without risking overshooting the table. Stated differently, the HALC requires more finesse and hand-feeling, while the Viscaria has better power coupling from this distance.

BH short pip openers against long pushes were dangerous but less consistent than with the Viscaria, as a greater proportion of shots crept past the end line, due to the HALCs bouncier nature and slightly higher throw angle. The BH openers felt crisper than FH loops, presumably due to the softer nature of the sponge of my short-pimpled rubber. This lends further support to my hypothesis that softer rubbers might be a better fit for the HALC.

The less precise feeling of the D09C/HALC combination, as compared to the corresponding Viscaria set-up, somewhat reduced my confidence  and, thus, my consistency - on FH pancake-type flicks. Given the higher throw angle of this combo, I seemed to have more success using mini-loop type flicks, which were consistent but only moderately fast, thus inviting counterattacks. BH flicks executed with the softer short pip rubber, on the other hand, felt crisper and were faster, flatter, and more treacherous.

The HALC is stable and not overly fast during warm-up FH and BH blocks as the ALC layers seem to provide the promised shock absorption. However, during match-like drills (receiving end of 3rd ball attacks), I found it to be more useful to take a step back from the table whilst executing aggressive FH blocks and counterattacks to avoid overshooting the table as the D09C catapult is activated on these high impact shots. BH blocks using the softer short pimpled rubber worked particularly well when executed close to the table as the blades bounciness gave the shots additional pace while maintaining a suitably flat trajectory.

The HALC produces respectable speed levels on smashes and flat hits, although the shots are not quite as crisp and fast as with the Viscaria. Still plenty of power to make outright winners.

The bouncier nature of the HALC amplifies the springiness of the D09C that shines through on more active strokes. These characteristics gave me some trouble whilst playing aggressive long pushes against short dead serves, as the resulting pushes either had a tendency of going too long or being easy to attack against due to low spin levels. Thus, I had to use very soft hands and focus to get the contact perfectly right to impart high levels of backspin. The HALC/D09C combo produced a muddled feeling on short pushes against short backspin serves, which rendered it challenging to get the feeling and amount of input power right. Thus, many of my FH pushes were too short or half-long and too high. In contrast, I enjoyed much better control on BH pushes with the softer short-pimpled rubber, simply because I was able to feel the contact point more clearly.

As with the Viscaria, I struggled to develop a good feeling for short pendulum backspin serves. I attribute these struggles to the rubber rather than the HALC. Thus, my serves were reasonably short and low, but not particularly spiny. As I explained in my Viscaria review, I normally use Hurricane 3 in my FH and rely on the rubbers tack for an extended contact time with the ball. In contrast, with the HALC/D09C combination, it feels like the service contact is shorter, making it harder to impart high backspin levels. I largely overcame this challenge by using super soft hands to brush the ball whilst serving. On the other hand, the HALC/D09C worked well on long top/side-spin serves as the extra bounciness from the blade and rubber combined to produce peppy serves.

The Harimoto ALC is an interesting limba-based 5+2 ply composite blade that likely would benefit from being paired with rubbers like Tenergy 05 or Dignics 05, which are softer than the Dignics 09C, as I expect this to produce a more well-defined crisp feeling. The HALC is a moderately bouncy offensive blade that will suit two-winged loopers of nearly all levels who play from mid-distance and like to produce shots with softer trajectories and greater clearance over the net.