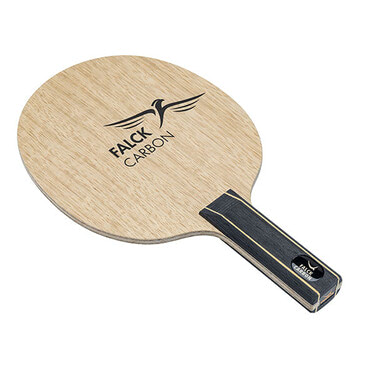 The Yasaka Falck Carbon blade is the right table tennis blade for the demanding player, looking for the latest in blade technology. The Falck Carbon offers a superb balance between speed and feel for the attacking player.

A few months before the WTTC 2019, Mattias started to use the new blade and his results were really good: semifinal in World Tour Platinum Qatar Open and the the silver medal in the World Championships in Budapest.

I finally received the 2 Falck blades after some time of waiting. I had to wait for the 2 blades since the stocks were not available at that time. The 2 blades were really worth the wait and I even kept one as another one of my go to blade. The Falck Carbon is not the blade that everybody expected it to be. I and other people have speculated that maybe Yasaka will just make a remade Ma Lin Soft Carbon or maybe the Ma Lin Carbon but it was a great surprise upon seeing that the Falck Carbon is an inner carbon blade. I was surprised that it has an inner carbon. It felt significantly harder and stiffer than the Ma Lin Soft Carbon and the speed seem to be near or equal to that of the Ma Lin Carbon. The carbon layer does not look like a standard carbon because it has a cross weave of a lighter material which doesn’t look like a carbon blade but near to maybe aramid or another similar material. The blade has some flex but it is way more stiffer than the Ma Lin Soft Carbon. I would say the speed will not exceed that of the Harimoto ALC. The Alnalde is much faster than the Falck Carbon. When I bounced the ball on the Yasaka Ma Lin Soft Carbon and Falck Carbon, the Yasaka Ma Lin Carbon was obviously slower and had the lower bounce. The sound of the ball bouncing on the Falck Carbon had a somewhat higher pitch but not enough to be equal with other harder carbon blades probably because of the inner carbon structure. I understand Yasaka has their own speed and control ratings but in my own opinion, the Falck Carbon is not in the speed level of Tamca Carbon blades because for me, it should not be faster than Koto ALC blades. It’s between off and off+. I am saying this because the speed is not that of a true off+ blade if you will compare it to hard pure carbon blades. Maybe it is time to introduce speed classification of Off++ and Off+++ blades since most of the Koto-ALC blades nowadays have an off+ rating already.

I think the Falck carbon is an all around style attacking blade. It is fast enough to attack from shots away from the table provided you have the right type of rubber used but still the control is good enough that it feels you are just using an off blade. Maybe this is the sensation that I am feeling that the blade is not too fast probably because of great amount of control the blade has. At 5.9mm thickness, the blade is not too flexy but also has some stiffness in it that the speed is balanced with the amount of spin you can produce when you are looping against underspin. I used the Rakza X and Rakza 7 for the test and despite the Rakza X being a very fast rubber, the control I got was really that of an Off speed blade. Too bad my Rakza Z EH has already eroded. I think it could have been a great looping combination with the Falck Carbon Blade as the limba outer plies and semi-flexy structure permits great looping possibilities with the blade. The feel is very close to the IF ALC blade but there is some sort of extra softness with each ball bounce when I was looping the ball. The speed is probably almost in the same level when I last used the IF ALC but in my opinion I felt a better amount of control with the Falck Carbon Blade. I have observed that when using the Rakza X and Rakza 7, the arc was medium to medium low.

The control is awesome because my shots seem pretty accurate despite using Rakza X which is considered a very fast rubber. At far distance from the table, I did not feel any reduction of speed and power when doing loops away from the table. In my opinion, the blade is much suited until mid-distance from the table for optimal use unless you are using a very fast rubber on both sides. Other strength of the Falck Carbon is that its stability when blocking strong topspins is on par with other hard and heavy blades. Also, I have used a short pip rubber in the backhand and I felt it was better than the Yasaka Ma Lin Soft Carbon because I felt that the YMLSC is too soft for my liking with short pips. I understand that Mathias Falck likes the set up but the Flack Carbon has more stiffness and I believe the stiffness adds a little bit extra juice in your shots and pairs better with short pimpled rubbers.

Overall, this is a great alternative to Innerforce ALC blade because it offers a lot of potential for a well-rounded attacking style of play. Yasaka has made another high-quality blade. The design is very simple but it plays above than what I expected it to play. I highly recommend this blade even to just intermediate players because of its superb control provided they use a 1.9mm or 2.0mm rubber. This carbon blade is very forgiving even for intermediate level players.

Review helpful?    Yes | No
External Review for Yasaka Falck Carbon on June 2, 2020
During several years Mattias Falck played with Yasaka Ma Lin Soft Carbon and improved his World ranking steadily. However, Mattias asked the Yasaka blade factory to develop a little bit faster blade, but still with as much ball feel as possible. After testing different carbon materials, combinations, and thicknesses of wooden veneers Yasaka factory was on the right way. By using the Japanese Premium Carbon (JPC) and 5 wooden veneers in exact thicknesses we had the perfect construction. The final challenge to get the perfect blade for Mattias was the gluing method. Few months before the WTTC 2019 Mattias started to use the new blade and his results were really good: semifinal in World Tour Platinum Qatar Open and the silver medal in the World Championships in Budapest. Yasaka Falck Carbon is the blade for the demanding player, looking for the latest in blade technology. Falck Carbon offers a superb balance between speed and feels for the attacking player.
Review helpful?    Yes | No