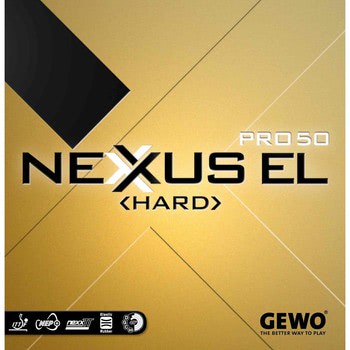 The Nexxus series of rubber possesses excellent dynamics with high catapult effect and feeling. The Nexxus 50 and 53 rubber has incredible speed and attacking power. The Nexxus EL Pro 50 is a high spin rubber with fantastic speed. Additionally, thanks to FlexTech technology which provides the rubber with an excellent feeling, it is still well controllable so that you will be in full control even at maximum speed. Powerful, close-to-the-table spin shots will put your opponent under extreme pressure. In mid-distance situations, you will be in control of the rally at all times. GEWO Nexxus EL Pro 50 Hard - feel the power.

Most players have already adjusted to the new ABS balls successfully and made the necessary changes in their techniques. At the beginning of this adjustment, players preferred rubbers with medium soft top sheets, for more ball rotation and speed, but now professional, and ambitious players more and more use hard to very hard rubbers which perform at their best in the close-to-the-table power play. In order to offer the perfect solution on this level, GEWO designers created the perfect rubber meeting the specific requirements of the individual players. The challenge was to find the ideal combination of maximum speed, spin, and feel without losing the indispensable level of control required in table tennis. With the new Nexxus hard rubbers, GEWO mastered this high-wire act perfectly. With the Nexxus Hard series, we proudly present a range of dynamic rubber top sheets to meet the needs of all players seeking extra performance.

Player type/features:
• Nexxus EL Pro 50 Hard is the ideal partner for players preferring high spin and fast playing.
• Mid Arc and dangerous trajectories which will give your opponent no rest.
• Pure dynamics and direct energy transfer for all modern, close-to-the-table stroke techniques.

Add a Review
External Review for GEWO Nexxus EL Pro 50 Hard on June 15, 2021
I used many Gewo rubbers that they are actually pretty good for their values. However the top lines are getting expensive nowsdays. This Nexus EL Pro 50 is the improved version of Gewo's popular Hype EL line of rubbers. I'll compare it's performance to Tihbar EXP / Donic Bluestorm Z1 but lighter. I glued it on a Bty. Taksim ALC blade.
Review helpful?    Yes | No
Review by yogi_bear for GEWO Nexxus EL Pro 50 Hard on June 3, 2020
Gewo Nexxus EL Pro 50
Weight: 71 grams
Speed: Off+
Hardness: 50 degrees ESN Scale
Thickness: 2.1mm Sponge

The Nexxus EL Pro 50 is characterized by its mark on the topsheet that says “HARD” and with a White sponge. The Nexxus EL 53 degrees also has the “HARD” mark on the topsheet but the sponge is an orange one. The EL Pro 50 is almost in the range of other similar rubbers like the Rhyzer 50, Rasanter R50 or the DNA Pro H. I believe they have the same generation of rubber technology with different descriptions each according to the company that sells them. To cope up with the greater demands of
The game among Pro or high level players, ESN has released increasingly harder sponged rubbers. If you base it on history, only a few rubbers that are hard which are found in the market about a few years ago made by ESN compared to know which every ESN company rubber seem to have something with 50 degrees or harder in the rubbers offered. I can remember that a few years ago only Xiom has a 54-55 degree rubber and maybe Tibhar K1 if I am not mistaken at 50 degrees or more. Now you can see that it is a trend. Before making a 50 degree rubber with non-tacky but grippy topsheets would be difficult to produce spin compared to what the newer generation topsheets can offer. They may have the speed but the grip and spin generation is quite lesser.

I will take for example MX-P 50 degrees. I believe the Evolution series are quite advanced in their time. As far as I know, they were offered by ESN to a company but then passed on to Tibhar. In the year 2012 or 2013, Evolution rubbers really stood out especially the grip of the rubbers but they are not as effective now compared to before due to the ball change. This is the reason why even if they placed a 50 degree sponge on to the MX-P and probably even with newer company boosting, the 50 degree MX-P is less spinny compared to the EL Pro 50 or other rubbers. The EL Pro 50 admittedly that I have used it now extensively, I would say it has somewhat a little higher level of spin compared to the DNA Pro H or MX-P 50. I could compare it to the amount of spin which the Rhyzer 50 or Rasanter R50 has because they seem to have similar amount of grip. The El Pro 50 has a much higher arc in loops against underspin and sometimes before the ball hits the other side of the table you can sometimes misjudge the amount of spin it has. There are times I thought it was not that spinny when it was passing over the net but when it lands in the table and kicks the moment you block it, you will be surprised with the spin that it has. I would say it has a medium high to high arc like about 3 to 4 inches when you are spinning versus topspin balls. If you have brushing strokes that you can use it in a Chinese tacky rubber, you can actually use it effectively with the EL Pro 50 but with a great adjustment on speed and control.

The speed is a true off+ speed for a rubber. The EL Pro 50 has almost the same range of speed with the Rhyzer 50 or Rasanter R50. If there are differences among the speed I would say it is quite minute or barely noticeable. The 47.5 or 48 degree rubbers may seem to be bouncy outright but the 50 degree rubber like the EL Pro 50 will have a higher ceiling of speed potential due to the harder sponge. This is where sponge compression and skill come in. What I like about harder rubbers is that like Chinese rubbers, they have gears. I believe aside from personal preferences, if you have the skills, harder sponged rubbers are easier to control with delicate strokes such as drop shots or short return. For me who is very used to Chinese rubbers, I find the EL 50 Pro very easy to serve heavy underspin serves. Smashing is one amazing to do with the EL Pro 50 but with blocking, adjustments may be needed especially on active blocking due to the hardness of the sponge. Maybe this is the reason that this is not an intermediate rubber because with stronger shots or blocking against stronger topspins can make the ball overshoot the table but for skilled or experienced players, this is not much of a problem. Overall, this is another offensive rubber that you can choose if you cannot afford Tenergy 05.
Review helpful?    Yes | No
External Review for GEWO Nexxus EL Pro 50 Hard on September 3, 2019
Great FH rubber. Feels softer than the 50 anounced. Excellent Spin regarding the speed!
You need to activate the sponge to get the spin, I couldn't recommand more for the players who like to Topspin aggressively!
Review helpful?    Yes | No