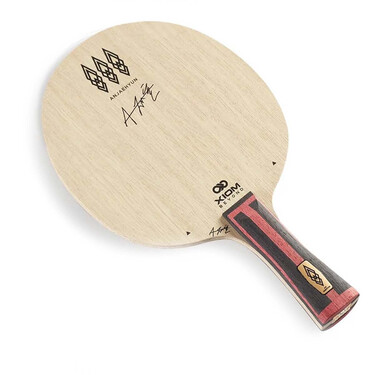 This is a blade designed by the XIOM blade R&D team to place the next-generation composite new material 'TMX (TRIMETRIX)' close to the center of the blade for the sensuous and powerful performance desired by An Jaehyun, a member of XIOM Stars and the national table tennis player of Korea.

The delicate vibration value setting of TMX to help control the ball in the strong topspin attack situation that An Jaehyun likes will give you an experience of dominating the game with a resilient ball and amazing sense that you have never felt before.

A blend of materials to create a new sensation!

The XIOM blade R&D team attempted to weave three special materials of different characteristics, Axylium, Zephylium,and X-Carbon, in one place for a new blade special material layer. And after numerous research and tests, they have successfully developed a new material TMX (TRIMETRIX) with an optimal balance point.

The selection of professional table tennis players, including national players An Jaehyun and Cho Daeseong, shows that the amazing performance of TMX is unquestionable.

Add a Review
External Review for XIOM AJH TMXI on July 16, 2022
The TMXi was paired with Jekyll & Hyde V47.5 on fh and Z52.5 bh. This blade is quiet unique and very interesting. When looping or doing drives and other aggressive attacks, the blade plays more like an outer carbon blade! Very fast attacks with a super crisp feeling. The ball kicks a lot on the opponent's side of the table. Speed feels slightly faster than a Timo Boll ALC / Viscaria. When doing touch shots and playing close to the table, the blade feels like an inner carbon blade with a satisfying vibration. The same vibration is felt on blocks which also felt superb. This blade also has a really good Katapult especially when looping and driving aggressively. The control on this wood is astonishing. For an offensive wood, I felt like I can do whatever I want and place the ball wherever I want. Lastly, the finish on this blade certainly feels premium and a notch up from previous Xiom blades. Definitely recommend this blade to players 1800+ USATT.
Review helpful?    Yes | No
Review by yogi_bear for XIOM AJH TMXI on June 29, 2022
Weight: 92 grams (Pro) 89 grams (Non-Pro)
Thickness: 5.9mm
Blade Head Size: 152mm x 158mm (Non-Pro), 160mm x 152mm (Pro)
Speed: Off+
Plies: 7 (Limba – Limba? – TMX – Ayous – TMX – Ayous? – Limba? – Limba)

The TMXi AJH blade is the flagship blade of Xiom for 2022. This blade was pre-viewed as early as last year wherein An Jae Hyun was using this blade in some of his games. There were also samples of the prototype showing up online by people who had access to stores. The one I saw was a version where the picture of the player was at the bottom of the handle.

The AJH TMXi is a blade made in Korea. This is an inner-composite type blade where the composite called Trimetrix is being used. Trimetrix is basically a triple composite material weave formed by weaving 3 materials – carbon, AL and ZL. The blade feels stiff but I could still feel some vibrations with it kept to a minimal when I was bouncing the ball onto the bare blade. People would think this is an Innerforce clone blade but due to the composite materials used, it is far from being one. The Pro version is slightly larger and heavier as what has been stated. The handle shape is somewhat different a little bit compared to that of the Hugo Hal or Ice cream blades. There are parts of the handle’s curve that feels different around the

I used all the new Jekyll & Hyde Rubbers from the 47.5 X and V Variants to the 50 and 52.5- degree variants. I weas lucky enough to test it with several types of rubbers with different hardness and performance. I have used both the Pro and Regular versions. The Pro version feels a bit heavier after you attached the rubbers due to an increase amount of rubber that is added with a bigger blade surface, you would need to swing a bit harder but then you would also get rewarded with a stronger shot. The difference would be minor so I will just uset he regular version here as an example. I have used both 2.1mm and max versions of each of the J n H rubbers.

The TMXi feels stiff despite having an inner composite layer. The feeling is still new to me despite having used a blade having the same composite material but with an outer or 2nd layer placement. The Trimetrix does not feel like any other composite blade because of the 3 composite weaves it possesses. It has some hardness of a pure carbon weave but at the same time it has some sort of better feel and stability granted by the AL and ZL strands respectively.

When I was bouncing the ball onto the bare blade, the sound was of medium pitch and the bounce is of any typical control offensive blade. It did not bounce as high compared to pure carbon blades or with zylon. I think there is a need to revamp the speed ratings of both rubbers and blades. I am saying this because for example in a group of off+ blades, there are blades that are faster from another blade in that same group. I have rated Tamca 5000 blades and similar blades to off++ instead because sometimes they are hard to compare and make the speed rating simpler to the person inquiring. This is a true off+ blade but it feels unique because it has the stiffness of a carbon and zylon composite blade but at the same time it has some of the impact absorption of the ALC. Like another blade with a similar composite layer but on the 2nd layer, the TMXi has a new distinct feel. The speed of the TMXi is comparable to that of the Viscaria, Stradivarius and other outer ALC blades. I would rate it a notch lower or 2 in terms of speed if compared to zylon-carbon blades. If compared to an Innerforce ALC blade, the TMXi is clearly faster.

What does the TMXi offer for players? The TMXi has the feel that has the stiffness you need for an extra speed or kick on your shots due to the carbon and ZL layers while at the same time, the ALC layers makes sure that the blade impact feel is not too stiff which makes the blade great for spinning the ball. I also tried Hurricane 3 37 degrees with the TMXi and this blade felt a good substitute for a setup that usually is prevalent in the market right now – tacky rubber on the forehand and a Jpn or Euro rubber on the backhand. The TMXi with all the rubbers tested, gave a medium to medium-high arc when looping the ball. Even with tacky rubbers in the forehand, the power did not diminish much with a distance far from the table. There might be some reduction in terms of speed, but this is due to the Chinese rubber used but when I switched using the Jekyll and Hyde rubbers for the forehand, doing counter loops about 15 feet away from the table did not feel slow. I must admit at first, I was not able to adjust to the feel of the blade since I am used to using ALC or ALC-like blades but after a few days, I began to like the TMXi since it was not really hard to control. It’s just that the feel needs to grow accustomed with given time but it is more of a personal preference and you will get to like the feedback of the blade in your hand.

Overall, this is an excellent attacking blade that excels almost in all fields. It is an almost complete blade that excels in blocking the ball passively or actively like punchblocks. It is stiff enough to smash effectively but at the same time has some flex to have that “feel and dwell” when looping the ball that it aids the rubbers in some sort of a “dwell” when brushing or grazing the ball. If you value delicate shots that are inside the table like dropshots or flicks, the TMXi will deliver these shots for you with no problem. I believe the blade is controllable even if an intermediate player uses the TMXi with slower or thinner rubber but this is used best by trained players.
Review helpful?    Yes | No