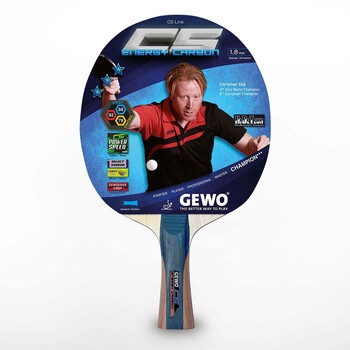 The GEWO CS Energy Carbon racket with enhanced power and speed was developed in cooperation with the multiple European champion and Olympic medal winner Christian Süß.

Christian Süß says: "The GEWO rubber CS Energy Power is an absolute power rubber that is targeted to power and speed. The elastic and sticky rubber surface does allow fast topspins with much spin and speed. I am absolutely thrilled! But the actual highlight of the racket is the blade. The elegant design and the specifically selected veneers with two sheets of carbon give the racket a high amount of rigidity that allows a high ball control. The SENSETISE grip module lets the racket fit in the hand perfectly. Two sheets of carbon protect the racket from wetness and prevent the racket to get warped.