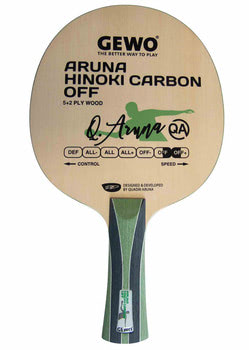 The Aruna Hinoki Carbon named after legendary world-class player Mr. Quadri Aruna is a fast attack offensive and professional blade. This racket, designed for both power shots and touch, is perfectly balanced and provides gentle and direct feedback. The Aruna Hinoki Carbon provides nice feel and control, and still has more than enough topspin and smashing power and speed. This blade designed for a legend is as versatile and creative as its name-giver.

The Aruna Hinoki Carbon is a high-quality blade from Gewo. This is made in China but the quality and construction seem to be much better looking than some of the European-made blades from Gewo also.
The smoothness of the Aruna Hinoki Carbon is very evident upon holding it, from the handle to the blade head surface, quality construction has been given emphasis. I would like to correct the stigma of people who think that OEM blades from China have very poor quality. The OEM blades from China can actually rival Butterfly’s quality but comes with a price. We know that OEM blades have a much cheaper cost compared to blades made in other countries such as from Korea, Sweden or Japan but Chinese-made blades depending on the quality demanded by the one who orders them can be increased to a level that rivals those of much more expensive brands. The handle of the Aruna Hinoki Carbon is a bit larger to Butterfly blades. It has a dimension of 34mm x 25mm x 100mm. I have the flared type handle and it is larger than the handles of Viscaria or Timo Boll ALC. The hinoki outer plies seem to have been carefully selected that you could mistake it as Kiso Hinoki. The sides of the blade have a fineline-like wood frame covering the sides. You can actually see the junction between the hinoki and fineline wood but it is tightly packed it could pass as a continuous and uniform blade surface.

The Gewo Nexxus EL 53 and 50 degree variant rubbers were used in this test. I decided to use the harder rubbers because the Aruna Hinoki Carbon has some sort of softness when I was hitting my fingers against the blade. The hinoki outer and the soft carbon composite layers may have contributed to the softness of the Aruna Hinoki Carbon. Overall feel is medium-stiff but it is fair to see you can feel some flex or softness in the blade when you are bouncing the ball against it both with the bare blade and with the rubbers mentioned above. To compare the speed of the Aruna Hinoki Carbon, I could say it is faster than an OFF blade but at the same time not as fast as the off+ Balsa Carbon blades of Gewo. I am quite sure it is faster than Viscaria or Timo Boll Spirit but slower than ZLC or Super ZLC blades of Butterfly. I would attribute the speed of the set up more on the 53 and 50 degree Nexxus EL rubbers than the blade itself. I believe the Aruna Hinoki Carbon is fast but when I placed an RITC Battle 2 rubber on it instead of the Nexxus EL 53, it was clear to me what the actual speed of the blade is. Yes , the RITC Battle 2 is slower than the mentioned Nexxus rubbers but it gave me a picture of the speed because I used the same rubber in other blades I have tested before. For other blade speed comparisons, I can say the Aruna Hinoki Carbon is faster than a Yasaka Ma Lin Carbon by a small margin or more or less equal to the Butterfly Innerforce ALC’s speed. The Aruna Hinoki Carbon has this bounciness that you can immediately feel but the speed is more than enough to give you power shots near and middle distance from the table if you use medium fast rubbers. It could be effective even at far distance if harder and faster rubbers will be used like the Nexxus EL 53 and 50 degree rubbers which I felt there was no reduction in speed or power.

For the spin, I already expected this to be very easy to spin with because of the soft carbon layers. Overall, the Aruna Hinoki Carbon has the flex and softness that can enable a player to produce heavy but fast topspins. I would say if you combine the Aruna Hinoki Carbon with Hard ESN rubbers like the 50 and 53 Degree Nexxus rubbers, you have high arched tospins. When I was looping this against backspins or doing topspins against blocks, I observed the ball height that is about 3 to 4 inches above the net for loop vs blocked balls and 4-6 inches when looping underspin balls. I feel little to no amount of vibrations with the Aruna Hinoki on all most all attacking shots. It does not have this vibration that I regularly experienced with a few blades I have tested in the past from other brands. I had this experience with a certain brand that some of their older blades have this crazy vibration when doing flicks to the point that you felt some sort of a jolt of shock in your hand. This is both a very balanced blade in terms of attacking and blocking. It is very fast that I believe it should not be rated as OFF only but it almost borders the range of being a true OFF+ blade. Despite the great speed, the control is that of a slower carbon blade. I would compare the control in the level of a Yasaka Ma Lin Carbon (not the Max 3D or Soft version). It is fair to say that it also excels in blocking as it is a stable blade to block with the comfy handle contributing to having less effort in defending against strong shots. Smashing on the other hand is above average. It is not the best on that area because of the flex but it can be compensated with harder rubbers. I would place the Aruna Hinoki Carbon more on the spinny shots area compared to pure smashing and driving shots. It does the job on smashing and driving but it would be a waste not to use this to make spinny shots because it is what it was built for in the first place.

I am not a fan of Hinoki blades and some people know that I do not but objectively speaking it is an excellent blade to use for offensive players. I would suggest this blade for advanced level players and maybe intermediate level players who have a few years of playing and also developed some offensive strokes to some extent.
Review helpful?    Yes | No