On this occasion, I was given the opportunity to evaluate one of the fastest blades in the Butterfly range, i.e., the Butterfly Lin Yun-Ju Super ZLC (LYJ-SZLC) blade. This blade has been developed in collaboration with, named after, and used by, the young superstar from Chinese Taipei (Taiwan), who has astonished spectators with his amazing banana flicks. The LYJ-SZLC is a 5+2 ply composite blade featuring a kiri core, limba intermediate plies, and Super ZLC (SZLC) fibers, which are placed below the outer koto ply. The SZLC fiber is a high-density weave that combines the properties of carbon (i.e., minimal dissipation of energy, resulting in high speed) and ZL fibers (increased strength and elasticity, whilst maintaining low weight). The SZLC fibers are nearly twice as dense as the regular ZLC fibers used in certain other Butterfly blades, which promises to further increase the sweet spot and speed of the blade while producing a medium-hard to hard touch. 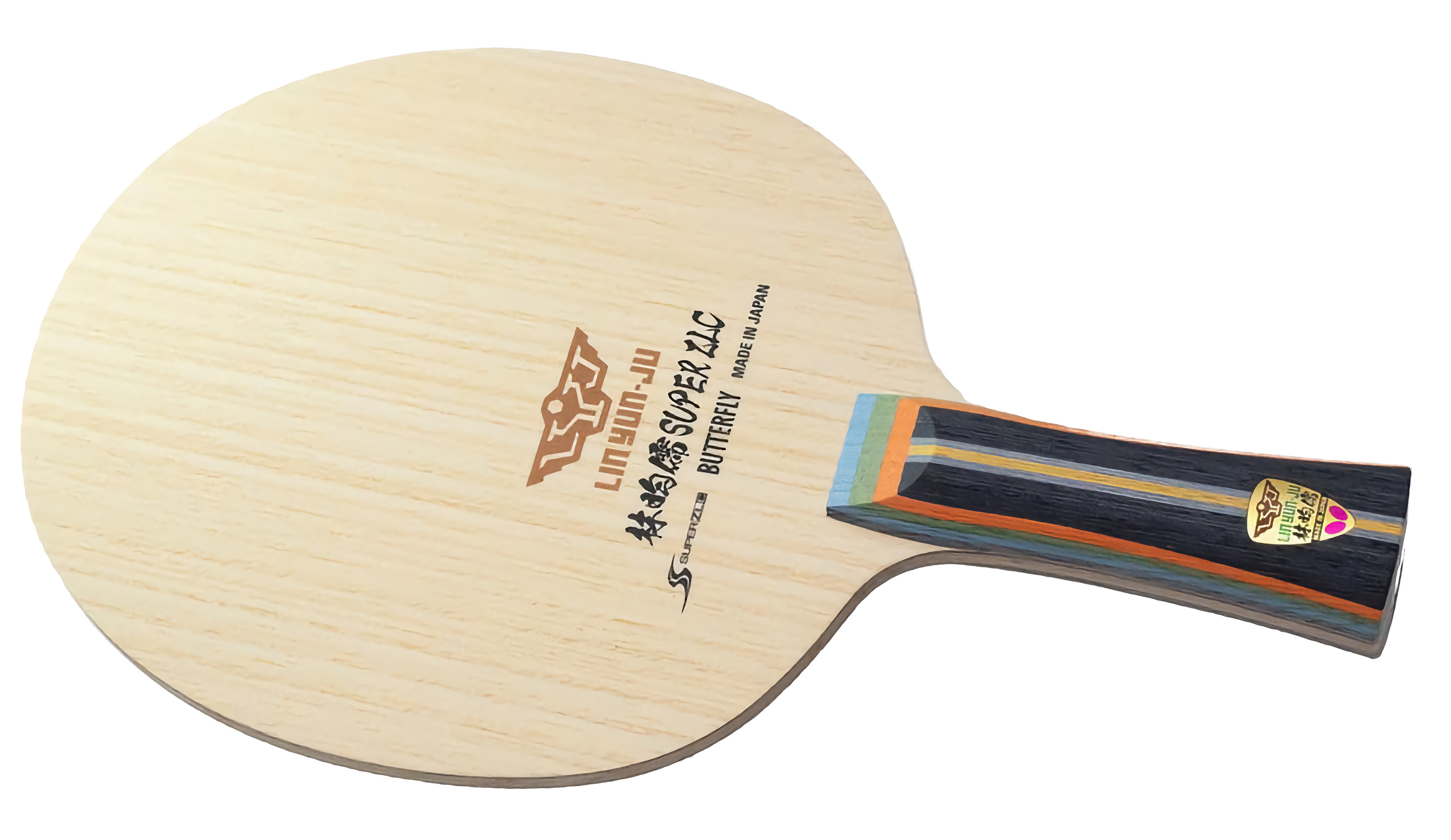 Butterfly describes the LYJ-SZLC as a blade having good momentum that draws out the power of hitting balls and stability due to a wide and high repulsion area and notes that it is these characteristics that enable LYJ to produce sharp banana flicks and high-quality counters. Butterfly assigns reaction and vibration ratings of 12.3 and 11.1 to the LYJ-SZLC, respectively. In comparison, the classic Butterfly Viscaria blade is rated at 11.8 and 10.3, respectively. In other words, the LYJ-SZLC is expected to be slightly faster and stiffer than the Viscaria. The popular Butterfly Zhang Jike Super ZLC blade has identical reaction/vibration ratings and a similar composition but is heavier.

The LYJ-SZLC is delivered in a sturdy box that provides excellent protection during transport. The outer box is green and dark brown with golden text. The blade is nestled in a golden inner box, which gives the packaging a premium feel. The blades name and key technical information are listed on a sticker on the front lip of the box. Instructions for proper blade care are provided on the back.

The blade name, along with Lin Yun-Jus distinctive logo, is listed on the FH-side of the straw-colored koto playing surface, whereas the BH playing surface is devoid of text. The handle features several golden, orange, green, and light blue vertical stripes against a dark-grey base, giving the blade a distinctly oriental look. A snazzy golden metallic lens, featuring the LYJ and Butterfly logos and the blade name written in English and Chinese, adorns the FH side of the handle. The BH side of the handle features a small, circular, rubbery holographic lens. The standard silver Butterfly tag is placed on the handle butt. The build quality of the blade seems excellent although the wings and edges do not appear to have been sanded.

I tested the LYJ-SZLC using the Butterfly Dignics 09C (D09C) in my FH (black, 2.1 mm) and short pips in my BH. I attached the rubbers using two layers of Butterfly Free Chack Pro II glue. I tested the set-up over 5 sessions playing a mix of warmup drills and matches against a mid-level practice partner using 40+ ABS training balls. Side note: I initially intended to test the LYJ-SZLC using the slower Butterfly Spin Art rubber, fearing I would be unable to control the D09C on the LYJ-SZLC. However, this proved to be an unsubstantiated concern.

Compared to the Viscaria reference blade, it feels as if the LYJ-SZLCs center of gravity is shifted ever so slightly closer to the head, contributing to a minimally heavier feeling. Both the LYJ-SZLC and Viscaria encourage a relatively loose grip, which is expected to facilitate looping and flicking.

The LYJ-SZLC produces a crisp and sharp feeling on FH and BH drives, although the sensation is less pronounced than with, e.g., the Stiga Carbonado 290. Whilst you will never be in doubt to be playing with a carbon blade, the sensation is surprisingly balanced for an outer ply blade. The LYJ-SZLC is faster than the Viscaria but not by much. I would characterize it as a high OFF blade. My FH/BH drives had deep and relatively flat trajectories that just had the right amount of clearance over the net to ensure good consistency. As advertised, the LYJ-SZLC has a large sweet spot, resulting in a consistent response even when shots are slightly mistimed.

FH looping with the D09C/LYJ-SZLC combination is near effortless. The rather high speed of the setup propels the ball forward in a direct, medium low-trajectory manner. The dwell time is quite short, shorter than with the Viscaria. As a result, topspin levels are lower than with the Viscaria, but the shots are faster and deeper. In essence, every FH topspin becomes a loop-drive. Accordingly, opponents with slower reaction times will have a harder time reaching FH loops originating from the LYJ-SZLC, whereas opponents with fast reaction times will have an easier time returning FH loops due to the lower spin levels. Playing against a mid-level practice partner in this test, I was able to convert many third ball attacks into direct winners due to the high speed of the blade. I suspect that combining the LYJ-SZLC with a very tacky and slower rubber like Hurricane 3 would yield a dangerous set-up that maintains great speed, but greater spin power to put high-level opponents under more pressure.

The higher speed and lower throw angle of the LYJ-SZLC as compared to the Viscaria are evident on loop-drives from mid-distance as a greater percentage of the shots clipped the net and/or slightly overshot the table. Like the Viscaria, the LYJ-SZLC provides a stable platform with a large sweet spot that enables FH loop-to-loop rallies from afar, although it is necessary to use a more open bat angle to generate the necessary trajectory and ensure sufficient clearance over the net.

BH hits through backspin with the short pimpled rubber were equally effortless and dangerous. However, the margin for error is narrow since short pips, by themselves, result in low-throwing shots. When paired with the LYJ-SZLC, the result is a high-speed low-trajectory machine. Proper timing is critical to prevent the shots from skimming the net or careening past the table. I had days where I hit almost every BH hit, and then days where I almost couldnt get a single BH hit to land. Even minimal differences in net height and timing seemed to have a major impact on the shots.

The crisp feeling produced by the LYJ-SZLC blade is beneficial for over-the-table flicking, and it is easy to see why a player like LYJ has chosen to use this blade. The crisp feeling, coupled with the high speed and low trajectory produced by this blade, gave me the confidence to execute aggressive flicks from both sides. The resulting flicks are fast and deep and often resulted in outright winners. Pancake-type flicks worked better than traditional mini-loop type flicks, which is unsurprising given the blades short dwell time.

The LYJ-SZLC provides a stable, relatively rigid, and non-bouncy platform for blocking. Coupled with the D09C rubber, enough energy is absorbed and redirected to enable stable, yet aggressive and fast blocks. BH blocks executed with the softer short pips were glassy and dangerously spin-inverted, yet still allowed for excellent consistency.

The large sweet spot and relatively fast and stiff nature of the LYJ-SZLC, allowed me to produce unreturnable smashes and flat hits from both sides. You will not lack finishing power with the LYJ-SZLC.

The stiff and fast nature of the LYJ-SZLC blade  coupled with the hard bouncy nature of the D09C rubber, renders it challenging to execute long FH pushes, especially against short no-spin serves. It is imperative to use soft hands on these shots to prevent the push from going too long. Emphasis needs to be on ball placement rather than spin generation. This problem was less prevalent on long BH pushes using the softer short pimpled rubber. Short pushes, on the other hand, were easier to execute, and benefitted from the crisp feeling produced by the LYJ-SZLC. Thus, the pushes were almost as short and low as with the Viscaria. Good hand feeling is required, nonetheless.

As with the Viscaria and Harimoto ALC, I struggled to generate high levels of backspin on my pendulum serves due to the short contact time with the ball, even though the feeling on striking the ball is crisp. As I have explained on earlier occasions, I normally use Hurricane 3 in my FH and rely on the rubbers tack for an extended contact time with the ball. The LYJ-SZLC/D09C worked brilliantly on long top/side-spin serves. The crisp feeling produced by the LYJ-SZLC gave me the confidence to explore the boundaries of the table and execute fast and very angled serves, which proved difficult to return for my practice partner.

The Butterfly Lin Yun-Ju Super ZLC is a fast, relatively stiff, and low-throwing 5+2 ply composite blade with a large sweet spot. The blade encourages a modern all-out aggressive style that places an emphasis on speed rather than spin. Advanced two-winged loopers, especially those who utilize over-the-table flicking to a great extent, are the main target group for this blade. Current Viscaria-users who have developed beyond their blade and/or want a set-up with even greater speed will want to consider the LYJ-SZLC.