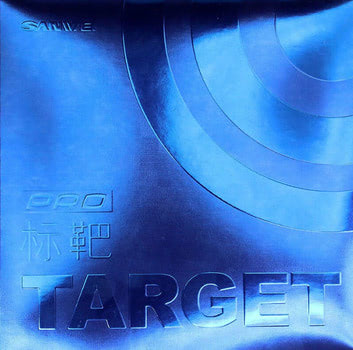 Our notes: This rubbers feels similar to the Tibhar K1 Hybrid but at a cheaper price. This sponge is an improvement over the original Target National and is also softer at 38.5 degrees. The original Target National has a much harder sponge. The Pro Blue National has the same topsheet over a new sponge, which makes it easier to use. Also, the Pro Blue has a much lower throw angle and is ideal for loop drives and fast loops over the table. Stiff or medium-stiff blades are recommended for the Pro Blue. Works great when boosted.

A specially made high-density sponge that has passed through a precise process of vulcanization. The expansion process eliminates shrinkage and tearing of the sponge, thus increasing the lifespan and performance of the rubber. Thanks to the high mesh number module production technique, the rubber produces stronger spin and a more stable power output for continuous counter-attacks and easy control of close to the table strokes. It's a great option for the skilled modern professional player.

Add a Review
External Review for Sanwei Target Pro Blue on March 24, 2021
Hello All. I have tested the SANWEI Target National before and I liked it, despite being an Euro/Jap player. I gave this rubber a try. I had some experience with YinHe Big Dipper, Tibhar MX-S, Palio HK1997 Gold, Palio CJ8000 Provincial. This rubber has a decent speed (40 degrees), it is easy to dig the ball into the sponge. As reactive as the CJ8000 Provincial. The topsheet has some tackiness, but it can only lift the ball, but can't hold it. Compared to BigDipper it was much more easy to play with. With chinese rubbers over the table flat shots often fall into the net when hit with Euro/Jap technique. This rubber was not different, but it was easy to handle and adapt to. As I don't play with chinese rubbers a lot, all I can say, that this is a comfortable and fast FH rubber from SANWEI. Compared to the Target National, this one is harder, less sticky and a bit more "chinese". I could play the Target National without any adaptation, but it was slow for me.
Review helpful?    Yes | No
Review by jjhlbh (Verified Customer) for Sanwei Target Pro Blue on August 16, 2019
You will be amazed at the quality of this rubber. I don’t feel any difference between this and other expensive ones. Very fast and spinny. It is not for beginners but for intermediate or above. Don’t pay $50-70 for same quality rubbers.
Review helpful?    Yes | No
Review by yogi_bear for Sanwei Target Pro Blue on July 5, 2019
The Target National Pro Blue is the newest addition to the offensive rubbers of Sanwei. They released the Provincial version called the Red 90 and the National Pro Blue Version. The Pro Blue has the same topsheet as the original Target National rubber but they incorporated a newer and more reactive sponge. The sponge is a hard blue sponge with semi porous characteristics. It comes with 3 hardness variants at 39, 39.5 and 40 degrees. The one I got was a black 40 degrees. When I first checked the rubber and pinched the rubber with my fingers, it seems to be softer overall compared to the original Target National rubber with the same 40 degree hardness. The weight of the new Pro Blue version seem to be lighter too if compared to the National Target. Imagine the original Pro Blue uncut has a bigger volume compared to the Target National but it has a lighter weight compared to the Pro Blue. The Target National has a weight of 70-72 grams uncut while the Pro Blue has about 68 grams uncut weight.

The Pro Blue has the same amount of spin compared to the Target National Blue Sponge but they differ in the sponge reaction and speed. I found out that the Pro Blue works best if it is boosted. I have tried the rubber with and without booster. Initially, I did not like the Pro Blue because the throw is very low. It produced a very low arc when looping. Sometimes, the ball hits the net and I had some adjustments in order to use the rubber effectively. I could say it is faster than Hurricane 3 without boosting with the spin almost at the Hurricane 3 level. The Pro Blue was good unboosted but the very low arc kinda made me adjust a few times. I boosted the Pro Blue hoping that the very low throw will be improved. I coated the sponge with 3 layers of Falco Long booster oil. I was glad I boosted the Pro Blue because it felt really different than the unboosted one. I felt that the throw or arc increased by a few times compared to the unboosted version. This is when I used it on several blades that I can say the Pro Blue is best used with boosters. The sponge softened a bit which now felt like it was 39 degrees. It is still significantly softer than the original Target National and this is probably with the sponge characteristics in absorbing and reacting to boosters.

If boosted, the Pro Blue has a medium throw and the ball digs deeper into the sponge compared to the boosted Target National rubber. Al in all, I can say that the Target Pro Blue has better boosting effects and also is easier to handle than the National BS. The Pro Blue at this rate is easier to loop and spin with wherein the Target National seems to require a bit more skill to bring out the best in the rubber. I can say it is easier to use than the Hurricane 3 and is a much better smashing Chinese rubber. Even if the Hurricane 3 is will be boosted, there are still times the ball hits the net when you hit it flat. With the Pro Blue, the smashes are a bit easier. I would also suggest using the Pro Blue with Medium or Stiff blades.
Review helpful?    Yes | No