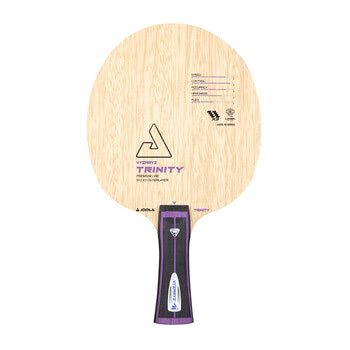 The JOOLA Vyzaryz Trinity is a complete game changer! In a JOOLA first, this blade employs the ground-breaking X3, a state-of-the-art super composite weave. To create the X3, horizontal layers of PBO-C were woven with vertical layers of AL-C. Imagine the ability to combine power, force, feeling, and accuracy, all in one blade! The outer layer of Limba adds even more touch to every shot. The 5+2 ply JOOLA Vyzaryz Trinity blade will give you the X3 super boost when you need it!

Add a Review
External Review for JOOLA Vyzaryz Trinity on December 29, 2021
88 grams. Well balanced. Forehand Boosted DHS Skyline 3 Provincial Blue sponge 2.1. Backhand Rasanter 50 2.0 Red. previous (Rhyzer 50 2.0/R42 - was too uncontrollable and slow on bh and too low and fast on fh). Short game is immaculate and is easy to dump balls with such a fast blade. Opponents spin is irrelevant in those games flipping, chiquita and drop shot pushes are achievable with high success rates. Easy to loop with Euro or Chinese rubbers. Tends to have less dwell for FH on euro tensors and this low throw. Great power 3-4 meters off table. Good spin when you want and easy to lift the ball slowly and spinny as hell or power loop 1cm over the net and you can choose. Blocks and counters are easier with harder rubbers and more consistent. Laser beam accuracy when doing the correct footwork and stroke. Great blade for off- players who tend to counter and sometimes 50/50 start the attack. All in all, great blade and worth the price. Hope it doesnt get discontinued in the future.
Review helpful?    Yes | No
Review by yogi_bear for JOOLA Vyzaryz Trinity on December 15, 2020
Weight: 87grams
Plies: 7 (limba outer – limba-zylon, arylate & carbon, ayous core)
Thickness: 5.76mm
Speed: Off to Off+
Stiffness: Nearly Stiff

This is the one that I tested first since this is the unique blade in the series and probably the first of its kind in the market that I know of. Having 3 composite materials in a single weave is unheard of for me for major brands. Other blades that I know in the market now are composed of alc and zlc on one side of the blade but never the combination of 3 materials. Overall construction of the blade is comparable to Butterfly’s higher end blades. The Korean factory that makes these blades has good quality control compared to the previous Chinese factory that makes their older blades. I forgot if Sunflex is the one that makes their older blades or some other OEM factories. The handle felt a little bigger than the TB ALC in some of the areas. The measurement is 25.66mm x 34mm at the base of the flared handle but in some area such as the neck of the blade, it felt a little bigger than the TB ALC. I have another blade from a different brand that was made under the same factory but it was a little smaller. The logo is made of thin metal covered by plastic probably to protect tarnishing due to sweat contact.

I used the Dynaryz AG, Rhyzer 45 TSP Spectol Red and Battle 2 rubbers for this test. I opted to use several rubbers because I needed to see the blade’s flexibility in using different kinds of rubbers for different styles of game plays. To be honest, the Vyzaryz Trinity felt weird when I was using it for the first time. It felt weird in the sense that the feeling is quite different and not because it felt bad. It was an unusual feel because the mix of zylon’s stiffness combined with some flexy feel of the arylate. It is hard to describe the feel but let me just say that it is not as stiff as the Vyzaryz Hybrid which only uses ZLC or any other ZLC or Super ZLC blades in the market but at the same time it feels much harder or has more stiffness than usual ALC blades.

For the speed, even though it is rated as Off, I can definitely say it is Off+ because I would placed it as a notch or 2 faster than Viscaria which we all know is rated as an Off+ blade but if you try to analyze it, it is not that fast compared to other known off+ blades. The TB ALC having the same composition as the Viscaria also felt slower than the Trinity and you can feel the difference in speed. The speed is fast not only because I was using the Dynaryz AGR on the forehand and Rhyzer 45 in the backhand but because despite using the Battle 2 at middle distance, I did not feel any reduction of speed. Although the Battle 2 was boosted, I felt that when I was using the Viscaria or TB ALC at middle distance I did feel some reduction in speed. People who tend to counter at far distance from the table will not have any problems with the Trinity because the speed and power it offers away from the table is fairly substantial. It maybe be a bit slower than the Zylon blades but it can hold on its own with such distance.
Despite some flex offered by the Trinity, it felt better as a power looping blade instead of a spinny, slow looping type of play. Sure there is flex due to the ALC component but I feel it would be wasted if you will not take advantage on what the Zylon’s stiffness is giving to increase the speed of your strokes. In that, I would recommend it to a player which has a bit higher level of skills to fully utilize the blade. When looping with the Dynaryz AGR or Rhyzer 45, it had a medium-high and long arc while with the boosted Battle 2 rubber, it had a medium-low and long arc.

Overall, it is multi-dimensional blade. It takes some time to fully adjust to the feel but it is an excellent blade. To say that the Trinity has the best of both worlds – zylon and alc characteristics, is an understatement. It felt very stable due to the combination of zlc and alc when blocking but when attacking, it has some flex of the alc that will let you loop in properly but also offers additional power due to the rigidity of the zylon fibers. When blocking, both fiber combinations also balances the control and speed. For short strokes or inside the table strokes, drop shots are not that fast and fairly controllable although the Freeze version of the Vyzaryz blades is so much better than this but bottom line, this is more related to skill rather than the blade itself. When used with short pimpled rubbers, the zylon fibers would give some rigidity to the blade enabling you to attack and receiving underspin properly but the alc fibers would offer some control on the shots. The Hybrid version was overall a better SP or LP attacking blade. Kudos to Joola for this new concept!
Review helpful?    Yes | No