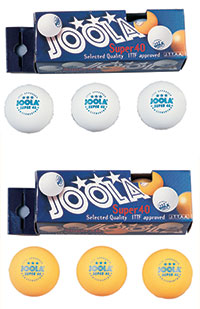 The JOOLA top ball with 40 mm diameter. ITTF approved! Official ball of the JOOLA North American Tour and the JOOLA North American Teams Championships. Official Ball of the Europe Top 12 tournaments in 2005 and 2007, official ball of many Pro Tour tournaments worldwide. Super has proved its quality time and time again as one of the most popular ball choices in international competition.