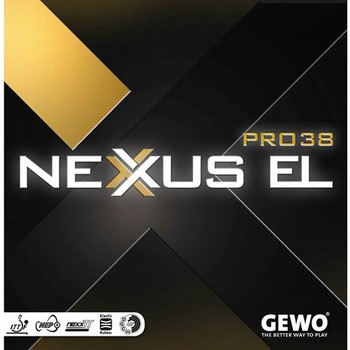 GEWO Nexxus EL Pro 38 - what a feeling, precision at it's best! Great feel, spin, and speed. Sound on!

The GEWO Nexxus EL Pro 38 is the perfect combination of maximum surface grip, speed, spin, and control. The GEWO Nexxus series is a line of modern-day offensive table tennis sponge designed for the high spin, and power play of today's professional table tennis game. This rubber is engineered to produce high-performance results from the new ABS 40+ ball.

The Power Package of the Nexxus series Maximum dynamics and a soft feel spin trajectory combined with enormous catapult effect are the prime features of this modern day offensive rubber. FLEX-TEC technology provides for maximum speed, while the DGC40+ 2.0 top sheet guarantees consistent and reliable coupling when the bat hits the ball., especially if used with maximum sponge thickness of 2.3mm and all the power you need for modern spin-offensive playing styles. This rubber produces absolute spin, soft touch, and perfect ball contact feedback. It combines the classic features of a soft rubber, blocking, pushing, touch play, with the extreme catapult and offensive speed needed to compete at a high level.

• Higher trajectory, with a focus on precision, and fantastic touch and sound effect with a large safety window.
• Suitable for modern offensive players preferring, softness, touch and a reliance on speed when needed.
• For players focusing on spin-rich play, placement, and precision.

Due to the arrival of the new ABS 40+ ball into international competitive play, rubber top sheets had to be adjusted accordingly to maximize new performance demands from the professional player. The latest ball generation produces less rotation and speed. To compensate for this loss in rotation and speed, you have two options: Adjust your technique or your material. GEWO aims at supporting the necessary physical adjustments with innovative solution approaches - a thin, high-grip top sheet (nexxTT) compensating the loss in speed and rotation with its inherent dynamics and higher tension. Combined with a medium-pore, dynamic sponge which, depending on the performance variant chosen (XT for speed or EL for the spin), makes the Nexxus Pro Series your choice for the best energy transfer possible. 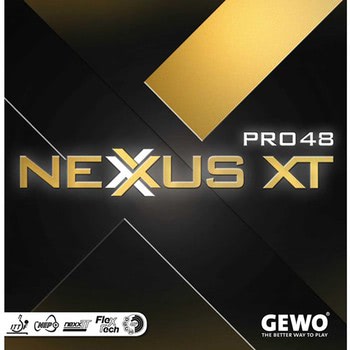 The Gewo Nexxus EL Pro 38 is the softest rubber in the Nexxus EL Series and also one of the easiest ESN rubbers to use in the market. The EL Pro 38, in short, has a lot of rubbers that I can compare in the market but it has its good qualities. It is as soft as the Xiom Vega Europe DF version although the Xiom Vega Europe DF is listed as 37.5 degrees but because of the range of hardness they are almost in the same level of hardness. The topsheet of the EL Pro 38 is crisp and very grippy. It cannot be considered as slightly tacky because I cannot feel any slight stickiness when I was pressing my fingers against the topsheet. It is as I have expected a very light rubber and a lot of people will like this for its very low weight and could use this in very heavy blades like those 95-gram blades that are too heavy to swing when paired with 50 degree rubbers. The ball obviously sinks into the topsheet and sponge with little effort but it is not as soft as the Xiom Vega Elite before which easily bottoms out. At least the El 38 Pro
has a little bit of firmness left on its sponge. It is also more firm compared to that of the Yasaka Mark V AD.
As what have been said, this is one easy rubber to use and perhaps the easiest ESN soft rubber in the market right now. I cannot describe what I felt with this rubber completely as I was not expecting much from this but it sure blew me away with its playing characteristics. The rubber is very linear. You get what you give on this rubber. The sponge and topsheet are both responsive especially on drives and topspins. This is better if you involve the sponge outright with all of you offensive strokes since it is kinda counter-productive if you do just thin brushing with the topsheet mostly. The sponge has to be involved a lot in a lot of offensive strokes. The soft reactive sponge enables you to do drives and topspins at the easiest level. No wonder this is even good enough for intermediate level at max thickness because this is not too fast. At 2.1mm it offers just more than enough speed that an intermediate player can control properly. I would say it is slower than the Vega Europe regular and faster than the phased out Vega Elite. It took me some strong drives before I could feel the ball bottom out but the level of sponge compression needed was more compared to the Vega Europe DF which in my opinion easily bottoms out.

For the spin, it is very spinny and I would say has a higher amount of spin compared to the Tibhar FX-P rubber. There are times that the FX-P for me needed a lot of sponge compression and some effort to spin well. In the case of EL Pro 38, the topsheet was much more grippy and has better ball grabbing to produce better quality spin. I have to admit that I am more of an MX-S type of guy and there were times that my spins with the FX-P hits the net and I had to actively adjust my racket angle a few times. I thought I was using a very great rubber. It has almost everything an intermediate and advanced player needs. I prefer this as a backhand rubber. Yes you can smash with this rubber and do spin drives but for me it seems a bit slow and too soft as I prefer the 53 degree version but as a backhand rubber this blocks like out of this world. It has a very stable blocking characteristic that even strong topspin shots are easy to block against with. For punch blocks it seems above average. For looping, it produces a medium low arc. It is spinny but not as spinny as its harder variants. I think this was made as some sort of intro rubbers to more advanced skills and stroke of a developing player and this is better because of control that it offers.
Review helpful?    Yes | No
External Review for GEWO Nexxus EL Pro 38 on June 4, 2019
A spiny rubber for good control on the forehand. It was played on a Butterfly Kreanga Carbon ULC, probably its full potential on a slightly softer blade is better. The serves are good as well as Topspin and block. A true all-rounder which ensures a controlled game and forgives much.
Review helpful?    Yes | No
External Review for GEWO Nexxus EL Pro 38 on October 13, 2018
Easy rubber, can do all with great forgiveness. Open loops are very forgiving to execute with this rubber, but also blocks, smashes, pushes, drives. Very spinny and grabs the ball very well. Speed is perfect for the allrounder who wants to be precise and safe in every shot. It has high arc so you can clear the net with ease. Ideal for who prefers to play topspin in many situations. I have it in 2.1 red.
Review helpful?    Yes | No