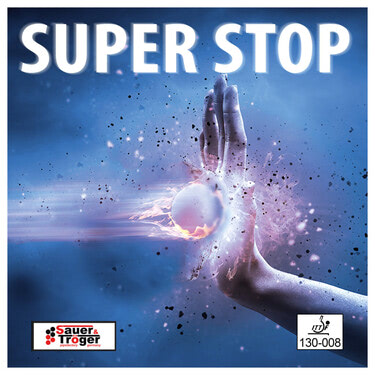 A slow low friction anti loop but easier to play than the new generation of slick frictionless anti rubbers that have recently become available.

The Super Stop is with approximately 22 grams an absolute lightweight among the rubbers. The top rubber is only slightly roughened and very thin. In terms of color, the black-gray top rubber of the Anti-Top is the opposite of the sponge, which has a bright yellow color. Both the top rubber and the sponge are to be classified as rather hard for an Antii-Top.

Due to its slightly roughened, hard top rubber, the Super Stop is very suitable for starting with an Anti-Top. It is much more controlled to play than a smooth Anti-Top.

The Super Stop removes the entire rotation from the ball. You will experience an incomparable control while playing with the slow, easy to grip Anti-Top. The rotation is completely neutralized and passive balls can be played extremely safely.

When you tap the ball aggressively over the table, the Super Stop also develops a strong rotation. The cut of the opponent is simply taken over and strengthened by small, fast movements in the forearm. Due to its moderate speed, it is no problem for the Anti-Top to play back powerful shots in a controlled manner. The ball then flies with a very flat curve to the opponents side. In addition, the Super Stop manages to play the ball half-long on your opponents half of the table, which makes it difficult for him to fully attack the ball.

In attacking play, pressing the ball against undercuts and especially the side wipers is very dangerous.

Add a Review
Review by jeffschultz for Sauer & Troeger Super Stop on July 1, 2021
I have used many long pips and antispin rubbers, but have been using this on my forehand for over three years now. I would describe it as a classic antispin best used for hitting (even hitting vs topspin), blocking and pushing, although it is also decent for chopping off the table. The speed is a little more than most classic antis, but it is not a "fast" rubber. When hitting, blocking and pushing it tends to kill spin rather than reverse spin. With forehand velocity, you can engage the sponge and generate a small amount of spin that adds to accuracy, but to the opponent, it feels like receiving a dead rocket. The ability to add a little spin is also helpful when dealing with dead balls. Serve returns are relatively easy since it kills spin. My offense has more control with red than black. Since the reversal is not high, the 1.5 mm is better since it is slightly faster and more disruptive. The throw angle is low. It plays much better with a stiff blade, either all wood or carbon. It is extremely light and the durability is excellent.
Review helpful?    Yes | No
External Review for Sauer & Troeger Super Stop on February 9, 2019
Coming from long pips without sponge I wanted more variation with my backhand strokes, especially attacking ones. I tried the Butterfly Super Anti and it worked great but.... it is a heavy rubber. Being used to a lightweight racket (with long pips 130g) it was hard to get used to a 150g plus racket. In comes the 1,9mm Super Stop. It weighed an incredible uncut 20g and was 170x170mm in size. The control with this rubber is fabulous, attacking possibilities are certainly there but require some training. When chopping a topspin ball you can hardly miss. For reversal of spin you'll need the slick anti, but the control this one brings is unparallelled to me. This really is a rubber for control and placement, not for awkard flightpaths of the ball. Actively played it's a great rubber, passively played it's dead sure in control. All in all, my anti setup has gone from 150g+ to a mere 125g and it plays marvellous. For durability I'll report back in a few months.

After a few months I must report that I no longer play with it anymore. I played at a higher level and noticed that my opponents had no difficulty at all handling the balls off the anti rubber. I went back to Long pips without sponge which gave a bit more trouble to the opponent. Still I regard the rubber as very good at what it does: delivering rock solid defense.
Review helpful?    Yes | No
External Review for Sauer & Troeger Super Stop on November 5, 2018
When assessing different rubbers as I switched from long pips to anti, I tried Transformer, Master Anti, Super Anti, Anti Power and this: Sauer & Trger Super Stop. Each type of antispin rubber that I tried had different strengths & weaknesses, and provided deception in different ways. I find this one the most interesting. It is not easy to use, but it definitely gives opponents at all levels more trouble than the others. I originally tried it on an offensive minus blade, which was too fast. This rubber has gears, and a fast blade keeps it stuck in high gear, which is only good when attacking, and even then control is difficult. On an all-around blade (in my case the DMS Invictus), it really shines across a broad spectrum of strokes, including blocks, pushes, chops off the table, hits vs topspin and crushing chops with smashes. It has some spin reversal, but not enough to make chop blocks very nasty. Blocks at the table and flat hits at the table generate troublesome balls due to the low throw angle. There is some grip, but less than other classic antis. I was unable to tell any difference between red and black. This rubber is extremely light. The gears are good. Blocks and pushes are slow and hits can be fast. The grip allows for more deceptive chops than can be attained with slick anti, and hits vs loops and drives are very effective after some practice. Making an opponent miss a shot through deception is modestly satisfying. Defeating his or her best loop with a rocket dead ball return is very satisfying. Hitting with Super Stop sounds like nailing shingles to a roof. I dont recommend this rubber as an entry to antispin; it is a technical and challenging rubber. But if you have a slick anti and want to move to something with more offensive potential, or if you have a classic anti and you want nastier shots, this is a good next step. It might be feasible to move to this rubber directly from long pips, especially OX with a low throw angle.
Review helpful?    Yes | No