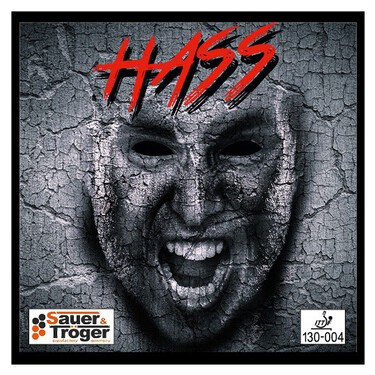 Even with short stroke action you can generate great power  dominate the game with powerful blocks and drives but with the added benefit easy blocking and spin negation that you associate with a short pimple rubber.

The individual pimples heads of the Hass are slightly further apart than on the Zargus. If you stroke over the pimples heads, you will notice that the buttons feel pleasantly soft. This allows you to tighten topspins on undercuts or balls with low rotation with little effort.

The top rubber consists of cylindrical pimples, which have the same diameter from the pimples neck to the pimples head. Compared to the Zargus, the pimples are slightly longer and narrower. This means that the speed of the stroke is immediately transferred to the ball. You can even play catapult-shaped topspins with small movements and put a lot of pressure on your opponent.

Why does your opponent look so dissatisfied? Such a face, just because you have already poured him an unreachable ball with the Hass? The short pimples have a built-in speed glue effect with maximum rotation. You can take the balls early after the bounce and put pressure on your opponent. The great strength is the pressure push or counterspin over the table. Thanks to the perfect energy transfer even with short movements, the rubber develops an enormous rotational force. This allows you to react to slow and standing balls with placed and powerful shots. The Hass also makes a good impression in defensive play. Due to the slightly longer pimples, the ball can penetrate deeper into the surface and can be blocked or shoved with great feeling The more control you wish for, the thinner your sponge should be!

Add a Review
External Review for Sauer & Troeger Hass on June 1, 2020
A rserver exclusivement sur le revers en paisseur de 1.5mm car sur le coup droit les balles coupes adverses sont trop difficile remonter.
Review helpful?    Yes | No
External Review for Sauer & Troeger Hass on January 4, 2018
For me the Hass rubber gave me some trouble in dominating the game as I like to do. The soft sponge made it easy to flip and lift backspin. However, when the game speeds up it becomes, in my mind, too inconsistent. It is both easy to miss the kill shot and hard to get back into the point when you're being pushed back and have to deal with the opponent's attacks. The other short pip I often play with, the Spinlord Waran II, is less good at flipping serves. Nonetheless, it is way more consistent and linear in the way it plays.
Review helpful?    Yes | No