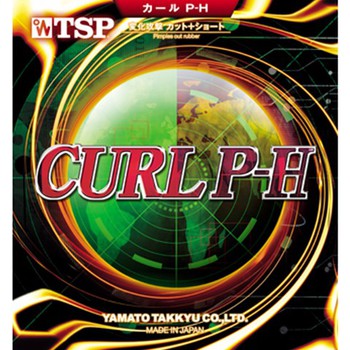 This is the OX version which does not have sponge.

The TSP Curl PH Long Pips rubber was produced with the longest and widest pips that the rules will allow. The TSP Curl PH has the ability to produce a unique "knuckle ball" effect on shots as well as produce effective speed for offensive shots. The TSP Curl PH allows for short backspin push shots over the table that are not possible with the other long pips rubbers.

The TSP Curl PH rubber was released in December 2008. This rubber creates unique long pips knuckle balls without very much effort with chopping. It can create variety of spin with chopping but not like TSP Curl P1R where it can generate heavy under spin. It is very stable and slower than TSP Curl P1R. It is possible to push underspin balls easily with TSP Curl PH.

TSP Curl PH Interesting long-pimple alternative for all players who are playing close to the table. - similar structured pimples to those of the popular Curl P1R, but harder - allows aggressive backspin push shots over the table - enables you to place the ball more effectively (close to the table as well as away from the table) - makes it easier to block topspins with a high disturbing effect.

The OX version comes with a glue sheet. You don't need glue sheet to affix the TSP Curl PH OX version onto a blade.

I was with TSP Pr-1 before.

Compare with the pr-1 this rubber is a breeze. Very easy on all aspect of the game, defense and attack. Being close to the table make the opponent to have problem with the diversities of the shot possible. From long to short push with spin or not. Chop block can be done lightly or very heavy with good reversal. Where the opponent is concentrated to return the ball carefully you can hit or top spin his ball. So for creative player it can be a blast !

The pr-1 demand concentration, right move and right speed and right technique to create the very spinny shot that he can generate but its a lot of work.

The PH can be played for recreation or with perfect tehnique and you can perform decent shot. Perfect technique and tactics will create havoc to the opponent !!!

I used it on my BH and have inverted fast rubber on my fh. I used it on an offensive blade.
Review helpful?    Yes | No
External Review for TSP Curl PH on April 7, 2010
played with OX at the table,blocking is easy, also difficult serves...playing fast is difficult because the rubber is slow.
Review helpful?    Yes | No
External Review for TSP Curl PH on January 4, 2010
I try to review this pips in english but It's going to be complicated for my because not my mother language.
Spanish
Estos picos no tienen mucha fricci&Atilde;&Acirc;&sup3;n y tras las prohibiciones de muchos de ellos es un punto a favor para esta goma. Son complicados de utilizar y lleva un tiempo el controlarlos perfectamente. Lo m&Atilde;&Acirc;&iexcl;s complicado de estos picos es la devoluci&Atilde;&Acirc;&sup3;n, pero a parte de eso nada m&Atilde;&Acirc;&iexcl;s, incluso te permiten golpear la bola y hacer peque&Atilde;&Acirc;&plusmn;os rallyes con los atacantes.
English( Sorry for my English)
These long pips don't have much friction and after bans many of them and is a point to favour for this rubber. They are complicated to use and takes time to perfect control. The most complicated of these pips is the return, but apart from that nothing else even let you hit the ball and make small rallies with the offensive players.
Review helpful?    Yes | No