by TSP · Part of Rubber Sale 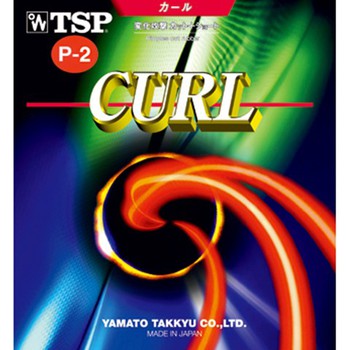 The TSP Curl P2 is considered as a medium pips while it is not. It has exceptional control and behaves like the medium pips.

TSP Curl P2 is now back in our collection since many European top players favored this unique long pimple rubber (about 1,8mm long) with wide pimples. The TSP has re-launched TSP Curl P2 again in 2009.

It is ideal for those who not only want to defend but also want better block and counter possibilities.

P1R has the longest and softest pips among the TSP Curl rubbers produces very deceptive spins and actions after bouncing.

P2 has the same design as before. This Curl produces deceiving spins while allowing you exceptional control.

P3 has the same design as before. This Curl is great for a combination of defensive and offensive play.

P3AlphaR is very pliable and has soft long pips produces more deceptive shots than P3 and P2. It will also absorb the fastest of drives and spins.

Add a Review
External Review for TSP Curl P2 on May 14, 2010
I have used the OX, 1.0 and 1.5 versions of this P2 rubber. OX is the slowest and has the most deception when pushblocking or countering. I personally, don't like the versions with sponge because they are too "normal" - not enough deceptive qualities and a little too fast for my style. I try to play like Richard McAfee with a little more agressive BH. I play with regular inverted on my FH and use the P2ox on my BH. I have discovered that if I flip the P2 to my FH vs lobs and use the P2 to smash, the ball is rarely returned. I can easily block and counter with the OX either softly or with force. This rubber is not for pushblockers who don't hit or counter with it. There are much better rubbers for that.
Review helpful?    Yes | No