Jinan, China, 2 November 2002. Zoran PRIMORAC (CRO) has never won even one game against top Chinese MA Lin  on Saturday PRIMORAC took four of them to beat MA Lin 4-2 and go to the semi-finals of the World Cup.
It looked more like a psychological contest than like a table tennis match. MA Lin is well known for taking very good time between rallies.

That always destroyed my rhythm in the matches against him, so I decided to take my time and be even slower. That seemed to work, says PRIMORAC.

Both PRIMORAC and MA Lin could easily have been shown both yellow and red cards for slow play, but it did not happen  and the match (4-2) lasted 1 hour and 20 minutes!

PRIMORAC won the first game ever against MA Lin to go to 1-0 and by that he gained confidence to go to 3-1.

In the 5th game PRIMORAC had his first match point, but he couldnt take it, and instead MA Lin won the game.

In the 6th PRIMORAC had two opportunities to take the match and he succeeded on the second.

In the semi-finals PRIMORAC will now face Timo BOLL of Germany who took out the other top seed, World Champion WANG Liqin.

Jinan, China, 2 November 2002. KONG Linghui is the last hope for the Chinese crowd at the World Cup in Jinan  and he is still there for the final. In a close semi-final he beat Austrian ace Werner SCHLAGER 4-2, but it didnt come easy.
KONG was leading all the way but the Austrian kept hanging in there.

KONG had the lead 1-0 and 3-1 but SCHLAGER took another game to close the gap. In the 6th KONG was well on his way to victory leading 7-3, but SCHLAGER is a good fighter and he caught KONG once more.
KONG however has this fantastic ability to play well at the last deciding points. On top of that he had a lucky net ball to go to 10-7, and on his 3rd match point he finished the match after an excellent rally.

WANG Liqin and MA Lin are out  but KONG is still there on Sunday.

Jinan, China, 2 November 2002. Zoran PRIMORAC (CRO) only came to the Mens World Cup as a substitute for Swede Jan-Ove WALDNER who got injured  PRIMORAC almost made it to the final.
First he surprisingly beat Worlds nr. 2 MA Lin (CHN), then in the semi-final he followed the European Champion Timo BOLL (GER) all the way to the end of the 7th game.

At the end however BOLL rose to the occasion and took the last points to win the game 11-8 and go to the final of the World Cup.
2002 has been a great year for Timo BOLL. He started out winning the Austrian Open and he advanced into the top 10 in the World. Then he took the European title, and he is currently nr. 3 on the World Ranking.

On Sunday he has the chance to take one more title. He will face Olympic Champion KONG Linghui (CHN) who survived his two compatriots, the favourites WANG Liqin and MA Lin.

BOLL has already showed his talent  on Sunday he has the chance to take the last step to the top, but the Olympic Champion KONG Linghui has improved for every match he has played in Jinan. He started out having troubles in the group, but against SCHLAGER you could again recognize the champion from Sydney.

Jinan, China, 3 November 2002. The match for the 3rd place at the Mens World Cup, unfortunately became very short. After only one game Werner SCHLAGER (AUT) had to default due to an arm injury.
SCHLAGER tried against Zoran PRIMORAC but being unable to follow through with his forehand topspin SCHLAGER had to give up.

I got the injury in the quarter finals against CHIANG Peng-Lung (TPE). It is in the upper part of my right arm, and already in the match against KONG Linghui (CHN) I had big pains. Today it was even worse, says SCHLAGER.
I asked the physiotherapist to give me some pain killer, but he advised me not to. If you get pain killer you dont know when you should stop.

PRIMORAC because of the default take the 3rd place at the Mens World Cup. 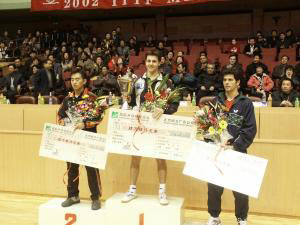 Jinan, China, 3 November 2002. The Mens World Cup in Jinan, China, became the final break through to the World top for young Timo BOLL (GER). He took home the World Cup and 44.000 US Dollars after beating first World Champion WANG Liqin (CHN) and then in the final Olympic Champion KONG Linghui (CHN).

BOLL started out a little shaky in the final and KONG quite easily took the 1st game supported by the enthusiastic home crowd. In a crucial 2nd game however BOLL came out on top after a few crisis, and with the game won and the confidence gained, BOLL was in control.
He took the next two close games, showing the capacity to win the important points.

In the 5th game KONG was far below level, and he made a lot of unforced errors to see BOLL go to 7-3 and 10-4. Then however something happened and KONG started to catch up. One point, two points, three points  and BOLL started shaking. KONG came all the way to 10-10 and the crowd was lifting the roof with their shouting.

That was terrible, at 10-4 I started to be too careful, and as soon as you are not aggressive, KONG comes at you, says Timo BOLL who now took his seat in the World top.

Of course beating the World Champion and the Olympic Champion to win the World Cup is the greatest in my career until now, says the new World Cup holder.