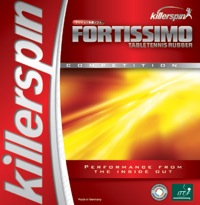 Greg Letts reviews the Killerspin Fortissimo rubber, our latest high tension product. Unlike 95% of high tension rubber on the market, Fortissimo uses a Japanese sponge that is lighter than Tenergy's spring sponge.

I've been using Fortissimo for a couple of months now (on a Timo Boll Spirit blade), so now I'm comfortable enough to offer my thoughts on this rubber.

Fortissimo is a speed glue replacement rubber that appears to be aimed at the power looping table tennis crowd, being a touch faster and a little less spinny then their new GT2 rubber according to the speed/spin stats.

Players looking for a speed glue replacement rubber that provides plenty of pace while still managing to give that extra aggressive spin that speed glue was known and loved for.


Who Will Hate It

Anybody looking to play a safe, controlled game should probably look elsewhere. This is a rubber that performs like a demon in the top gears, but can be a bit of a handful in the touch game.

THE ULTIMATE INNOVATION IN RUBBER TECHNOLOGY!
The Killerspin FORTISSIMO is an extremely innovative rubber made especially for high-level topspin players. The Fortissimo synchronizes modern technology to make this rubber unlike any other! The rubber consists of a hybrid top-sheet made of an elastic compound, which generates amazing rebound, as well as a soft compound that helps grab the ball and create more spin. Equal components of natural and synthetic rubber give an extra spring effect.

The Fortissimo features the best of 'East meets West', incorporating a made-in-Japan sponge, ideal for powerful top-spin shots, as well as German 'Torqsion TM Technology', which is stronger than normal tension standards, giving the rubber an added performance edge. All of this technology is protected by Killerspin's plastic bag to maintain the rubber's integrity from production to the court.

The topsheet is grippy without being too tacky or sticky, and a bit softer than many other tension type rubbers. The sponge seems to be around medium firmness, although Im not an equipment junkie so take my opinion with a grain of salt. Its also a reasonably heavy rubber, not as heavy as some Chinese rubbers but definitely not one of the lightest out there. Two sheets cut to size on my Timo Boll Spirit rubber (which has a fairly normal size head) weigh in at 172.5 grams for the rubbers and blade in total.

I havent tried a lot of speed glue replacement rubbers, so Im going to compare Fortissimo to Butterfly Tenergy 05, which I tried out a while back, and which seems to be a pretty popular choice among power players these days.

This also means that it plays fairly close to how standard speed glued rubbers play. Its great for power looping  that old speed glue zip is there in spades. It also does a pretty good job of spinning  Im a spin looper when attacking and I had no problems producing a good spinny loop with a bit of zing thrown in for good measure. Lovely!

Counterlooping is a breeze, and blocking feels like blocking with any other speed glued rubber  a bit touchy at times but not excessively so.

Of course, no rubber is perfect, and neither is Fortissimo. In the short game, I found it to be a little harder to handle than a speed glued Mark V or Sriver, but Id say this is because its a little less spinny, and doesnt have the benefit of the speed glue softening the sponge to improve control. But its not uncontrollable by any means, it just needs proper handling and care, such as when serving and returning serve short.

Most tension type rubbers suffer from being a bit fragile due to the extra stress on the topsheet, but Ive found that Fortissimo is actually quite tough. Perhaps its because the topsheet is softer rather than harder, but Ive hit the edge of my bat on the table a few times, and the rubber hasnt chipped at all, unlike other tension rubbers. At the prices these rubbers go for these days, having a rubber that can stand a bit of rough handling is a definite plus.

Ive been using Fortissimo for my attacking play for a couple of months now, and Im quite impressed with this rubber overall. Its close enough to a traditional speed glued rubber that I dont have to worry about adjusting my attacking play, and the old speed glue feel is there. Its a fraction harder to handle in the short game, but the ability to hit thunderbolts with strong spin is there, as compared to a Tenergy 05 which gives you the pace but not the spin.

In conclusion, Id probably say that the Tenergy 05 is suitable for power players who are playing a lot and can live with the lesser amount of spin produced, and resulting smaller margin for error. Fortissimo feels nearly as fast, but has the extra spin which gives you a bit more arc when attacking and thus a bit more room for mistakes  so for those power players who only play a few times a week (or who want to get that old speed glue spin and feel), I think Fortissimo would be a better choice overall. At any rate, when its time to replace my rubbers, Ill be going for Fortissimo over Tenergy 05.